Port Vale look to extend their three-match winning streak when they host Liverpool U21 for the EFL Trophy fixture. The visitors would be determined for their first win in the EFL Trophy group stage.

Port Vale vs Liverpool U21 to Win

Port vale came into this game after three consecutive wins and are without a loss from the last five matches. They have four wins in the last five attempts. On the other end, Liverpool U21 have a terrible run of defeats behind them, losing nine games in a row. The last H2H meeting has witnessed Port Vale with the lead at their home stadium. So it would be easy to pick the home side as our favourites in this match.

Goals have flowed in the recent matches of Port Vale where they have produced 16 goals in the last five games. The visiting side is losing consecutively but has managed to score six in the same duration and scored twice in two games. The last H2H also gave a total of six goals shared from both sides. So given all these stats, we predict this match to follow a high-scoring total after 9o minutes.

Port Vale’s attacking line has shown great consistency and has been scoring in every match for a long time. Liverpool U21 also have scored in four of their last five games. Despite losing the last H2H meeting against the Valiants, they scored two goals in that match. The chances are more to see this duel with both teams scoring the goals at the same time.

Port Vale vs Liverpool U21: Team News and Match Preview

The Valiants lost the opening game of the EFL Trophy group stage after a long drama against Bolton but managed to get the precise result in the second game against Rochlade. Port Vale have hammered Accrington in the last match by 5-1 victory in FA Cup. The team also have secured the second position in League Two with just three points behind the first

The Mighty Reds have been an easy option for their rivals in this season of the EFL Trophy. They lost the opening game of the group stage against Rochdale 4-0 and the last game against Bolton 4-1. Liverpool U21 hold the long streak of defeats behind them and are currently on the last of Group 4.

Top Betting Odds and Stats for Port Vale vs Liverpool U21

FAQs regarding Port Vale vs Liverpool U21 Coverage and Accessibility 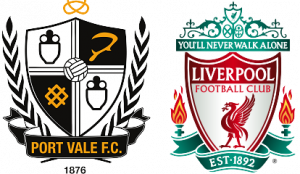 Port Vale won with a 4-2 scoreline.