Port Vale will host Newport in a crucial fixture from the 45th round in League Two on Monday.

Port Vale are in the fight for direct promotion while Newport have already finished this season and have no chances.

Port Vale struggled in their two most recent games and definitely need to step up in the upcoming game. Neither side has been scoring too many goals in recent weeks and despite that over 2.5 earlier in the season, it seems like Newport have abandoned the remaining games if we consider their most recent performances. We do not expect a lot of goals from either side and perhaps not even one from the visitors.

Port Vale are the stronger team right now despite their two recent defeats. Newport have nothing to fight for while Port Vale have real chances for direct promotion as long as they win their matches and Northampton fail in at least one. They are definitely not the best home team in the league but good enough to be considered “one of”. We expect a strong performance for their last home game of the season.

A few teams stepped up their game at the end of the campaign and Port Vale were one of them. The team has been a contender since the start but had its ups and downs that put it behind at one point. Now, they have a real chance to get promoted directly but in each case, they need one more win to completely secure the playoffs.

Newport had an incredible run at one point in the season that put them from the bottom half to the playoff zone. Unfortunately, that form disappeared and they were one of the better teams that stepped down in the final chapters of this campaign. We had serious expectations for Newport but the team lost four of its last five games and their chances disappeared.

Top Betting Odds and Stats for Port Vale vs Newport

FAQs regarding Port Vale vs Newport 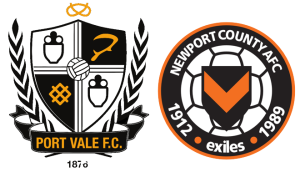 In which places are Port Vale and Newport right now?

With two rounds left, we still do not know which seven teams will get promoted or participate in the playoffs. Newport are 11th right now with 66 points and no chances but Port Vale are 4th in the league right now.

This fixture has been scheduled for Port Vale's home ground – Vale Park.