Will Port Vale manage to bounce back in the promotion race with a win against Stevenage, who have been in terrible form? We are about to see on Saturday.

Port Vale spent the better half of the season in the front but the last couple of months have been disappointing and saw the team fall below the play-off zone.

Stevenage and Port Vale had a considerable number of games with over 2.5 goals this season but not as many as the top teams. Port Vale, for insta,ce had 12 out of 30 with over 2.5 goals and an average of 2.5 goals in their games. On the other side, Stevenage have had an average of 2.4 goals in their games but a lot more games with three or more goals – 15 out of 33. We, however, expect to see a low-scoring game as Port Vale have had seven out of their last eight games with less than 3 goals. On the other side, Stevenage have not scored in three consecutive games and have been terrible overall.

We expect a surprising draw here despite the fact that Port Vale are the stronger team in general and the big favorite here. We think that Stevenage will show a better face and gain a point against Port Vale, who have had three losses and five drawas in their last 10 league tames. Port Vale were once the strongest home team but have now made 5 draws in front of their crowd. Stevenage lost just a single game on the road this season but they had a bunch of draws too. We think that Port Vale have been struggling in recent weeks and there is a great chance that we will see a draw.

Top Betting Odds and Stats for Port Vale vs Stevenage

FAQs regarding Port Vale vs Stevenage 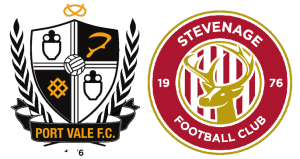 • In which places are Port Vale and Stevenage?

Port Vale have had some struggles in recent weeks which saw the team fall out of the promotion zone – they are currently 10th with 46 points. Stevenage had a short period of improvement that is now over – they are 19th currently with 33 points.

This game will be played at Port Vale's home ground – Vale Park, which has a capacity for 20,552 spectators.