In this AFC Champions League fixture, Port FC take on the challenge of Cerezo Osaka. The Japanese outfit has a pole position and one hand on Play-Off qualification, while Port FC also have a mathematical chance for passing through.

The Sakura have impressed with their performances on the continent, winning both of their Group J fixtures. While Port were condemned to a defeat against Kitchee, Cerezo easily secured the points against the Hong Kong-based club. The distinction about who will take home the points will be made on game day but it is easy to predict a win for the Japanese club. Kitchee were the latest scalp they accumulated and Port FC will be next in line.

In their respective matches, both Cerezo Osaka and Port FC average 2.5 goals per match. Interestingly, their first group fixtures ended in an Under 2.5 goals scoreline and the following one with three. With qualification for the Play-Offs on the line and both teams having a realistic chance of qualifying, this will be a contentious low-scoring affair. Expect Cerezo Osaka to take the lead and hold their lines to force the result in their favour.

Going into the final fixture of Group J, Cerezo Osaka has the better goal difference. Not only have they outscored their rivals but also kept them from scoring. Meanwhile, Port's goals came in their dismantling of whipping boys Guangzhou as Kitchee claimed a clean sheet against them. The J1 League outfit will not leave it to fate to decide their destiny and will look to keep a clean sheet. They will take a page out of Kitchee's book and look to secure a positive result without taking on any damage. As the final whistle is blown, expect a clean sheet in their favour.

The Thai club has had a topsy turvy campaign in the AFC Champions League. From a thorough beating at the hands of Kitchee to a complete dismantling of Guangzhou in the next. They still have a chance to qualify for the Play-Offs, provided they defeat Cerezo Osaka and Guangzhou register an unlikely victory over Kitchee. Sarawut Treephan will want his side to take the chance on offer and leave the rest to fate. Sergio Suarez is their key to success. The Spanish midfielder has scored 14 goals for Port this season and more of the same will be expected from him in this crunch fixture.

Following their third-place finish, the Sakura are struggling in the J1 League. However, this could not be made out if one were seeing their AFC Champions League performances. They have been in complete control of their fixtures to register successive victories. Guangzhou FC was shut out in a 2-0 victory, while Kitchee's opener was deemed useless in a come-from-behind victory. The last remaining hurdle remains Port FC, which are also in line to qualify for the Play-Offs. Their only concern remains in the attacking department as they do not have a reliable scorer with 39-year-old Yoshito Okubo leading the club's scoring charts with five goals to his name.

Top Betting Odds and Stats for Port vs Cerezo Osaka

FAQs regarding Port vs Cerezo Osaka Coverage and Accessibility 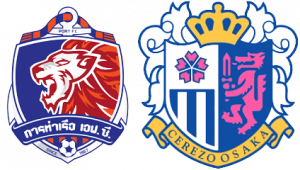 The game is played at the Chang Arena in Buriram.