This preview looks ahead to Thailand outfit Port FC taking on Guangzhou FC for the first time in their history. This AFC Champions League match will be taking place at the Chang Arena in Buriram.

Port FC are preparing for their second AFC Champions League group game after losing the opener 2-0 against Hong Kong outfit Kitchee. Guangzhou had to go through a 2-0 loss against Cerezo Osaka in the opening group encounter. The top tips for this game are:

Guangzhou had to go through a disappointing opening day defeat. As a result, the Chinese outfit go through a tremendous increase in pressure which could affect the team going forward. Port FC’s first-ever AFC Champions League match in the group stages ended in defeat, but Sarawut Treephan’s men have enough reason to believe that the upcoming few sets of fixtures can help them recover. In the home league, Port FC do have a decent home advantage and they should get a draw against Guangzhou, who have one win in the normal time of the last 10 games.

Even though Port FC have been involved in a string of high-scoring matches at home, there will be plenty of nervousness get of this crucial AFC Champions League game. After losing the opening encounter, both teams would be feeling the heat. This might see both teams cancel out each other in various sections of the pitch.

Guangzhou have been quite disappointing when trying to score on the road. The club’s failure to get past the group stages last season was largely down to this attribute. Yet, Port FC’s defence at home does not look the strongest with the team conceding in four consecutive matches. Even then, both teams do not inspire a lot of confidence ahead of this encounter and one of them might end up not scoring at least a goal.

Port FC will be hoping to make their inaugural Champions League campaign a success, but the loss against Kitchee has made things very difficult for the Thailand outfit. The major consolation for Sarawut Treephan will be that his team are at home in three out of the next four group matches.

A disappointing set of results in the Chinese Super League appeared to get better with wins over Shenzhen and Cangzhou Mighty Lions, but the opening game loss against Cerezo is a huge blow for Fabio Cannavaro’s men. Last season, the team missed out on a place in the play-offs due to goal difference. This happens to be a must win game for Guangzhou to meet the club’s ambitions and objectives this season.

AFC Champions League Odds and Stats for Port vs Guangzhou

FAQs regarding Port vs Guangzhou game 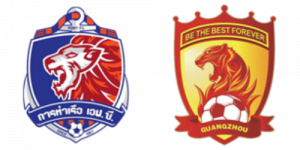 Chang Arena in Buriram will be the location for this AFC Champions League game.

The team regarded as a favourite to win the match would be Guangzhou.