Rigas secured a 2-2 draw in Belgium last week and should be full of confidence heading into Thursday's 2nd leg. Gent missed a big opportunity in the 1sat leg and will have to be at their very best if they want to progress any further in the Conference League this season.

Both teams scored in Belgium last week with the 1st leg ending 2-2 and we're expecting goals at both ends of the pitch on Thursday as well. Both teams have scored in three of Rigas's last four fixtures as well as three of Gent's last six outings, so you can see just why we're not expecting any clean sheets on Thursday.

We were treated to 4-goals in the 1st leg between these two clubs and we're backing over 2.5 goals to be scored in Latvia as well. Over 2.5 goals have been scored in three of the host's last four matches and three of Gent's last six games have also produced at least three goals.

Darko Lemajic has already scored 5-goals in Europe this season for Rigas, one of which was the opening goal in Belgium last week. We're backing the Serbian striker to get on the scoreboard once again on Thursday evening as Rigas look to cause a big upset.

Can Rigas cause an upset and knock Gent out?

While Rigas would have taken a 2-2 draw before their 1st leg against Gent had kicked-off, the fact that they went 2-0 up and failed to hold onto a lead will have slightly taken the edge off the result. Having said that, a 2-2 draw in Belgium is a great platform to build from and Rigas will be looking to make the most of their home advantage on Tuesday.

Gent did well to come back from two goals down at home to Rigas last week but before the 1st leg kicked-off, they would have expected to win the game with relative ease. Gent have the better of the two squads but need to start positively this Thursday as pulling back a deficit in Latvia is likely to prove much tougher than it was in their own backyard.

All you need to know about Rigas vs Gent 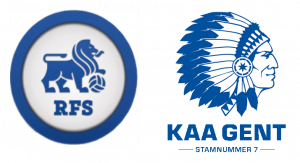 Where is the game being played? Daugavas Stadionā (Rīga, Latvia)