The next fixture from the Europa Conference League includes two teams that are on completely different levels – PSV and Maccabi Tel Aviv.

Maccabi Tel Aviv were fortunate to play in one of the easiest Europa Conference Groups in Autumn while PSV failed to qualify for the play-offs of the Europa League. Both teams are in good form overall and this game will be curious.

We were all expecting to see more goals from PSV in the Europa League this season but the team failed for some reason. This time, however, they will be facing a team that has had some serious defensive issues throughout this campaign. While they did not concede a lot in their ECL group, it was quite a weak group overall, so it was expected. In their domestic league, however, they concede a lot and PSV should not meet serious difficulties in scoring a lot as we know they could.

Team To Score in Both Halves – PSV

PSV are 2nd in Eredivisie after Ajax and have been destroying most of their domestic opponents all season. Maccabi Tel Aviv have been having a disappointing season in their domestic league and have low chances for the championship. Overall, the Dutch elite is a far stronger league than the Irsaeli top tier and it is no wonder that PSV are the massive favorites here. Since the odds are not good enough for betting, we picked a different line at perfect odds – PSV to score in both halves. The team has been quite dominant overall but more importantly, Maccabi Tel Aviv's defense has been disappointing. They concede in all of their games and often more than two goals.

Maccabi Tel Aviv took a considerable number of corners in the ECL group last year but it is a fact that they took corners only against the weaker opponents when they were the side that dominated. PSV, for their attacking football, take a surprisingly low number of corners and it doesn't really matter the opponent – they just generally rarely have a lot in their games. We think that we will see something like their usual stats in this game, like 7-8 corners max from both teams. 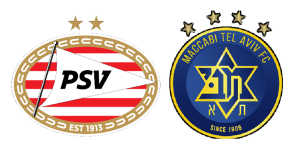 • Which players will miss the match for Maccabi Tel Aviv?

The visitors have not listed any players as missing for this game.

• Which players will miss the match for PSV?

PSV, in turn, have listed almost an entire team of missing players. Defenders Emmanuel van de Blaak, Shurandy Sambo, Andre Ramalho, Mees Kreekels, and Olivier Boscagli will miss this game, They will be joined by midfielders Ryan Thomas and Ibrahim Sangare, as well as forwards Maximiliano Romero and Carlos Vinicius.

This match has been scheduled for 17:45 UTC on Thursday.