With two rounds left in the Chinese Super League, Tianjin Tiger and Qingdao are in serious danger of relegation. But while Tianjin still have a positive chance to survive, Qingdao's mathematical chances are critically low. Which team will win the three points and retain its chances to play in the Super League next season?

Qingdao have had one of the worst seasons in the history of the Chinese Super League and if we have to be honest – they do not deserve to play in the elite next season. Tianjin Tiger have not been any better but they at least managed to snatch some points from draws throughout the season. Neither team is particularly impressive in either attack or defense, so this match will either be extremely goal-packed or completely goalless.

Obviously, we have two teams that cannot boast with good offensive capabilities. The good thing here is that their defenses are much worse – Tianjin have conceded 35 goals in 20 games while Qingdao have been even worse – 47 goals conceded in 20 games. It is fair to expect that either team will concede at least one goal in this fixture. The previous match between them ended in a 1:2 win for Qingdao (2 weeks ago), so we expect to see something similar in this fixture.

Although Qingdao won the previous head-to-head game and as visitors, we can say that this result was totally unexpected and honestly undeserved. What we mean is that Tianjin Tiger were significantly better throughout the whole match but they simply couldn't score their chances. This time, however, the stakes are even higher as Tianjin are just 1 point below the 6th in the league, which is above the relegation zone. The team has much greater chances to survive this season and we expect them to be far more motivated for this fixture against the absolute weakest team in the league.

Betting on the away team to score 2 goals is never the most optimal choice in the Relegation Group but in this particular case, we believe the odds are worth the risk. As mentioned already, Qingdao have the weakest defense in the league and Tianjin desperately need the three points here. We expect them to be the better team again but this time, they should score more than one goal out of their many chances.

Top Betting Odds and Stats for Qingdao vs Tianjin Tiger

FAQs regarding Qingdao vs Tianjin Tiger 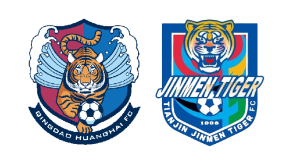 • How many points to Qingdao and Tianjin Tiger have at the bottom of the standings?

Qingdao are last in the league and have been for a long time now – the team has won just 11 points in 20 games which is one of the worst records to date. Tianjin Tiger are not much better but still above them – 15 points from 20 games.

We mentioned how many they conceded – 35 and 47 but how many did they score this season? Qingdao, of course, have the weakest attack as well – 12 goals scored in 20 games. Tianjin Tiger, in turn, have scored 16 goals.

This match has been scheduled for 7:30 UTC on Friday, December 31.