Rakow Czestochowa and Gent are at the final hurdles for UEFA Europa Conference League group stage qualification. The first leg will be played at the Miejski Stadion Piłkarski Raków where the Polish outfit hosts their Belgian rivals. Both Rakow and Gent will fancy their chances after winning their last two fixtures.

Rakow needed extra time to get over Rubin Kazan to reach this stage. They have a tough task on their hands as KAA Gent arrives in Poland to extend their two-match winning streak. The Jupiler League outfit scored in each half against Mechelen in their last outing and did not give breathing space to RFS in the fixture before. With the hosts having trouble scoring with regularity, we expect the visiting Gent to claim bragging rights on the road.

Rakow and Gents are still in the starting paces of the 2021/22 campaign. Interestingly, the majority of their recent outings have seen less than three goals. Two of Rakow's last three outings finished with an Under 2.5 goals scoreline. For Gent, the record books read three of their last three matches being low scoring affairs.

Given the stakes involved, both Rkow Czestochowa and KAA Gent will not allow the other to get on the scoreboard. Out of Rakow's last five fixtures, four have seen just one side get on the scoreboard. Three of the fixtures finished 0-0 within 90 minutes of regulation time. It seems that the Belgians have followed the lead of their Polish rivals, with the last three matches seeing just one side trouble the scorers.

While keeping their league aspirations alive, Rakow has managed to get past their European rivals with grit and determination. They have had to rely on efforts beyond the stipulated 90-minutes of action to arrive at the play-offs. Marek Papszun will want his charges to score more regularly but the onus will remain on his defenders to keep off Gent attackers. Rakow has an upper hand on their rivals with extra time for rest following their last competitive engagement.

Hein Vanhaezebrouck is in his second year in charge of KAA Gent. The Buffalos have yet to relive their glory days with the 57-year-old and the first step of this redemption path will be the qualification for the UEFA Europa Conference League. Gent has found form at the right time, keeping two clean sheets in succession and confidently getting on the scoreboard. There will be a concern about their match fitness as for the third week in succession, they are playing on the weekend and midweek.

Top Betting Odds and Stats for Rakow Czestochowa vs Gent

FAQs regarding Rakow Czestochowa vs Gent Coverage and Accessibility 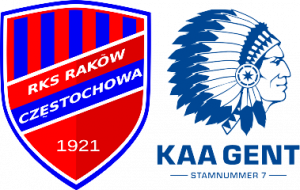