Rochdale and Bradford meet at The Crown Oil Arena in England’s League Two on Saturday. Can the Bantams continue their charge toward the playoffs with a win against Rochdale? Read our free predictions and find the latest odds for the fixture below in our detailed match preview.

Rochdale have lost four of their last five games in League Two ahead of their tussle with playoff-chasing Bradford. Read our top three predictions for this weekend’s fixture below.

It’s taken them a while to get going, but Bradford are finally starting to look like League Two playoff contenders and the Bantams have lost just two of their last 11 matches in the division. In contrast, Rochdale have lost three of their last four fixtures, while Dale have also dropped points in 75% of their last four assignments at home. City have the edge in terms of momentum here and there is value in backing them in the double chance market on Saturday.

Rochdale’s recent games at the Crown Oil Arena have been action-packed in recent weeks and both teams have hit the net in four of Dale’s last five home matches. Similarly, BTTS has also landed in five of Bradford’s last six League Two tussles on the road, and with game-changers plentiful in each camp, we’re tipping the net to ripple at both ends again this weekend.

Bradford hotshot Andrew Cook scored one of his team’s goals when the Bantams beat Rochdale 2-0 back in October and the 31-year-old is our bet to get in on the act again in Saturday’s rematch. Cook found the net in two of his last four runouts in League Two and he is just two shy of double figures for the campaign overall in League Two. Cook certainly knows how to finish chances and we’re tipping him to make his presence felt again here.

Top Betting Odds and Stats for Rochdale vs Bradford 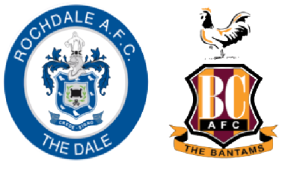 Neither club is in with a shout of winning the League Two title this season.

Rochdale have been priced as slight favourites to beat Bradford this weekend.