Rochdale will host Bristol Rovers in an important match from the second-to-last round in League Two.

The season might be over for Rochdale but Bristol are still fighting for their place in the playoffs at the end of the campaign.

Bristol Rovers are in great shape while Rochdale remain on the level of an average League Two team. The hosts are not a high-scoring team and we often see them fail in games but Bristol Concede goals quite often. We also have a rich history between these two teams that suggests an incredible match. The last four head-to-head games between them ended with both teams scoring goals.

Bristol Rovers are the stronger team here but they have been making a lot of draws lately too. Rochdale are the team in League Two that has had the most draws out of the entire league this season and this continues to happen. Overall, both sides are in good shape – Rochdale lost a single match at home in their last 10 games while Bristol Rovers lost a single match in their last 10 games overall.

Bristol Rovers have some of the most extraordinary corner stats in the entire league and we expect a high number in this fixture as well. For example, Bristol Rovers took an average of the whooping 8.00 corners in their last five away games in the league. On the other side, Rochdale took an average of 4.20 corners in their last five home games in the league.

There is a lot of potential in this Rochdale squad but they have been failing to win again and again this season. This huge accummulation of draws cost them an entire season in League Two. If only they had a better attack, they would have been much higher in the table right now. The defense can also be improved and we will be expecting more from them in the upcoming campaign.

Bristol did not have a good start but they managed to improve a lot in the second half of the season and became a real contender for promotion. The team lost only 2 games in their most recent 15 and actually won 10 of those too. Their defense is solid overall, although it allows goals from time to time. They need one more win to secure that playoff spot but a match against Rochdale will be a difficult challenge.

Top Betting Odds and Stats for Rochdale vs Bristol Rovers

FAQs regarding Rochdale vs Bristol Rovers 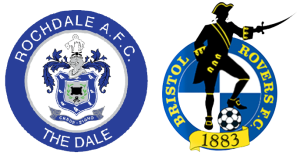 In which places are Rochdale and Bristol Rovers?

These two teams are on the opposite ends of the table and we already explained why. Right now, Rochdale are 18th with 50 points while Bristol Rovers are all they way up at 6th place and have 74 points.