Rochdale and Crawley meet at the Crown Oil Arena on Saturday in England’s League Two. Read our predictions and find the latest odds for the game below in our match preview.

Rochdale have lost four games on the bounce in all competitions ahead of their clash with Crawley on Saturday. Read our top three predictions for this weekend’s fixture below.

Crawley slipped to a 2-1 defeat at in-form Tranmere in their last league outing, though Town had started to turn a corner before that, winning three out of four fixtures in League Two. John Yems’ charges are playing with a noticeable degree of confidence and they look a solid bet to avoid defeat on Saturday against a Rochdale outfit that have lost four games on the spin in all competitions.

Crawley’s upswing in results has been complemented by some exciting contests, indeed, both teams have scored in four of Town’s last five fixtures in England’s fourth tier. Rochdale meanwhile, have notched at least once in three of their last four League Two tests on home soil, so expect both teams to get on the scoresheet at the Crown Oil Arena on Saturday.

Rochdale have scored in three of their last four home matches, but a single effort on each occasion was the sum of their achievements. Indeed, the Dale have yet to score more than once in a single game at home this term and their binary output opens up an opportunity to back Crawley at +1 in the handicap market this weekend. That bet would have landed a winner in five of Town’s last seven league games, so stick to that market here.

Rochdale have few injury concerns ahead of Saturday's game and Robbie Stockdale has options to choose from for the Dale's clash with Crawley. Rochdale's 1-0 defeat to Port Vale in the Papa John's Trophy in midweek was their fourth loss on the trot in league and cup, while a three-game winless run in League Two has knocked the club back to 16th position.

Jordan Tunnicliffe and Samuel Matthews look set to stay in the treatment room this weekend, while Joel Lynch is also rated as doubtful for Crawley. Town limped to a 4-0 defeat at home to Leyton Orient in the Papa John's Trophy on Wednesday, though their league form has been more reliable. John Yems' side could climb to as high as sixth place with the right set of results this weekend.

Top Betting Odds and Stats for Rochdale vs Crawley 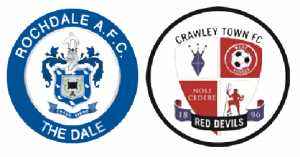 We recommend using the odds at William Hill for Rochdale vs Crawley.