Rochdale will face Crew in the final fixture of the first round in the English League Two on Saturday.

Rochdale will be looking forward to this season after a terrible campaign last year. Crewe, in turn, will try to make it up for that disastrous campaign in League One. Here are our predictions.

We have two low-scoring teams but they have a lot of history between them that suggests we might see an incredible rivalry this season. Most of the games between them in recent years had multiple goals and from both sides too. At the same time, both teams showed more potential in their off-season games and had predominantly goal-packed matches.

Rochdale had one problem last season – they had too many draws. They were the team with the highest number at the end of the season – 17 in 46 games. Wigan, in turn, were the weakest team in League One last season and lost 31 out of 46 games. The team has not improved a lot although we saw some good performances in friendly matches. We think that Rochdale will reach a draw at the start of the campaign.

Next to the over 2.5 goals, we expect to see goals from both sides. Crewe had the tied second-weakest attack in League One last season but we have no doubts that they will perform much better in League Two. Rochdale are definitely not a great team and they do concede goals in most of their matches. Moreover, the last three times that these teams played, we saw goals from both sides and more than 2.5 in most cases.

We explained Rochdale's main problem of the previous season – the draws. The team had a negative goal difference, albeit a close one – 51:59, and the problem is that the simply cannot outscore their opponents in most matches. They have potential and we did expect more last year, so as long as they improve that defense or even just the attack, they should be higher in the table.

Nobody expected that Crewe will be the team that gets relegated and with such weak results. They had 29 points after 46 rounds, which is unbelievable and also the worst goal difference of the entire league – 37:83. The team may not even be good enough for the better teams in League Two and it will not be surprising if we see them stay in the lower tier for a couple of seasons.

Top Betting Odds and Stats for Rochdale vs Crewe

FAQs regarding Rochdale vs Crewe 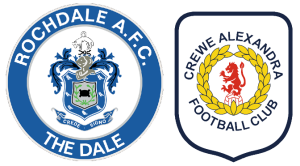 This fixture has been scheduled for Rochdale's home ground – the Spotland Stadium.

Like the entire round, this match has been scheduled for 15:00 UTC.