Northampton continue their promotion race with a match against Rochdale, who have had an overly disappointing season due to their accumulation of draws – the most in the entire league.

Both teams are in good form although in Rochdale's case, the team has had mostly draws this season and they haven't really ever been bad. Northampton remain near the top of the table and need the points more than ever with several teams within a win from them.

It is a fact that most games between Rochdale and Northampton had a bunch of goals in recent years – six out of the last eight games between them ended with both teams scoring goals. However, we should take a closer look at Northampton and their games overall and in recent weeks. Northampton have had the third-fewest games with over 2.5 goals this season – only 11 out of 32 games. The visitors have had 9 out of their last 10 games with less than 3 goals and they have conceded the least goals in recent months out of the entire league. There are often cases that they even don't score either.

Northampton had a bunch of draws this season, most of which in away games. However, we should focus on Rochdale's performances – the team with the most draws since the start of the campaign. Rochdale have had 14 draws out of 30 games to date and eight of those 14 happened at home. Most of the games between these two teams over the recent years also ended in draws. We think that we will see something like this as Northampton have not been a high-scoring team at all and if Rochdale's defense is on point, we might see a 0:0 or 1:1 max.

Northampton took a considerable number of corners on average per game this season – 4.63 – but most of those happened in home games. On the road, Northampton are the team that has taken the least corners out of the entire league and the stats are far below the stats of all other teams – only 3.50 corners per game on the road. It is true that Rochdale gave their opponents an average of 4.71 corners per game at home but we think that Northampton will have a difficult time against this opponent. The overall corners market is also a good option for the under 11 corners.

Top Betting Odds and Stats for Rochdale vs Northampton

FAQs regarding Rochdale vs Northampton 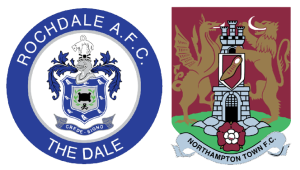 • In which places are Rochdale and Northampton?

Northampton have spent most of the season at the top of the league – the team is 2nd with 56 points but there are a few teams within three points of them and each point is crucial for the team. Rochdale are at the bottom half of the table, safe from relegation but far from promotion – 16th with 35 points.

This game will be played at Rochdale's home ground – Spotland Stadium, which has a capacity for 10,000 spectators.