Salford and Colchester face off at The Peninsula Stadium in League Two on Saturday. Salford are making a dash for the playoffs in the fourth tier and they can maintain their drive with a win against Colchester. Read our free predictions and find the latest odds for the fixture below in our detailed match preview.

Salford are unbeaten in four home games as they prepare to host struggling Colchester on Saturday. Read our top three predictions for this weekend’s fixture below.

Salford have been playing their way into the playoff shakeup in League Two, winning four of their seven matches in the division to move within four points of the elusive seventh spot. On Saturday, they host a Colchester outfit that has lost five times on the bounce and City should be able to make their superiority count against the struggling relegation candidates.

Colchester have been leaking an alarmingly high number of goals of late, especially on the road where the U’s have shipped 11 times in their last four away assignments. Salford could never be described as prolific, though they have a chance to enjoy themselves in the final third against such a wretched defence on Saturday and we recommend backing them in the over 1.5 team goals market as a consequence.

Buoyed by their superb win at Port Vale on Tuesday evening, we expect Salford to come out of the blocks quickly in search of a follow-up victory against Colchester and we expect the hosts to get their noses in front before the interval. The visitors have been behind at half time in three of their last four away contests and that record suggests they are worth opposing the HT result markets again.

Salford vs Colchester Match Preview: Salford on the up

With just two defeats in their last ten league games, Salford have been putting together a run that’s worthy of potential playoff contenders and anything other than a win for the Ammies this weekend will be seen as a major disappointment. Gary Bowyer’s side haven’t quite caught fire in the final third yet, though they have conceded just seven times in their last ten tussles in League Two.

There is just a three-point buffer been Colchester and the relegation zone ahead of their meeting with Salford this weekend, though the U’s are arguably the worst team in the entire division at present. Colchester have lost each of their last five matches in League Two and their last-minute defeat to Sutton (3-2) on Tuesday was another body blow to their confidence.

Top Betting Odds and Stats for Salford vs Colchester 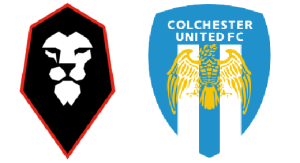 Salford vs Colchester is not being shown live on TV in the UK.

Salford beat Colchester 2-0 when the teams last met back on October 2nd.