Salford will face Mansfield in the early fixture from Monday's League Two Program.

Salford and Mansfield are fighting for the same goal but while Mansfield need three more points, Salford need to win both of their remaining games.

Neither side is among the teams with the most goals this season but both Mansfield and Salford are in good shape and can score a lot of goals. Most of Salford's recent games had a lot of goals and at home, in particular. Six out of the last 10 home games ended with over 2.5 goals while 7/10 ended with both teams scoring, which is an alternative option for this fixture.

Mansfield have been the better team overall this season and are sitting higher in the table. However, Salford have been much better in the past few weeks alone and their home performances have been extraordinary. They won four of their last six home games and scored at least two goals in 5/6 matches. Mansfield have had some struggles on the road and they are far from the best visitors right now. Plus – they can afford a defeat.

Salford showed us that anything is possible over the last couple of months. The team was an average League Two side and then went on an 11-game defeatless run that put them right below the playoff zone. If it wasn't for the two recent defeats, they would have been right there next to Mansfield. They need the three points desperately and we think that their chances are great against Mansfield on the road.

Mansfield is another success story from this incredible season in League Two. After a rough season start, Mansfield went on without a defeat for months, having a 14-game win streak that put them near the top of the league. They need three more points or at least two draws to secure that spot in the playoffs. However, if they manage to win this game and with luck – the next one too, they might even reach the direct promotion.

Top Betting Odds and Stats for Salford vs Mansfield

FAQs regarding Salford vs Mansfield 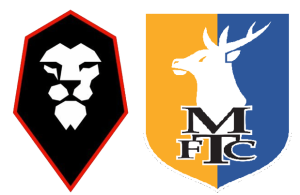 This game has been scheduled for Salford's home ground – Peninsula Stadium.

This match has been scheduled for 12:30 UTC.