Salford welcome Northampton to The Peninsula Stadium on Saturday for a League Two tussle. Read our free predictions and find the best odds for the contest below in our match preview.

Salford have lost three of their last four games ahead of another tough test against Northampton on Saturday. Read our top three predictions for this weekend’s fixture below.

Salford were beaten in three of their last four assignments, though it’s worth noting that all three of their defeats came on the road, and The Ammies are a much tougher prospect at The Peninsula Stadium. Northampton, however, have lost only once in four away games this term and The Cobblers are proving just as tough a nut to crack. With the teams’ respective records digested, we’re tipping the sides to cancel each other out on Saturday and backing a draw could be the best route to take.

Bettors on the lookout for goals this weekend are advised to steer clear of Salford’s clash with Northampton. Seven of The Cobblers’ eight League Two tussles this season produced under 2.5 goals, while Salford are averaging just 1.0 goal per 90 minutes of action on home turf. With both sides short on goal-scorers, stick to the under 2.5 line on Saturday.

Northampton have routinely been strong starters this season and The Cobblers are one of only three teams in League Two that haven’t been behind in any game at half time this term. Interestingly, Salford have yet to go in losing at the interval at home this season, indeed, four of their first five league fixtures at The Peninsula Stadium were all square at the break and the evidence suggests that backing a half time draw again on Saturday could pay dividends.

Attacker Conor McAleny is Salford’s only major injury concern ahead of Saturday’s game and Gary Bowyer’s side will need as many fit and firing players as possible to reverse their recent slump. The Ammies run of three defeats in four is a dismal return – as is their haul of just two victories from eight League Two fixtures so far.

Defensive duo Joseph Mills and Sid Nelson are both expected to miss Northampton’s latest league fixture. Elsewhere, The Cobblers have options to choose from and they should be in confident mood following a run of just one loss in six games. Scoring goals remains an issue however, and Town have notched just seven times in eight League Two matches since the summer.

Top Betting Odds and Stats for Salford vs Northampton 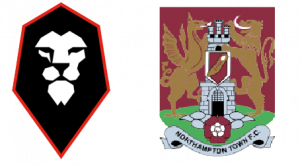 Salford have been priced as favourites to win by William Hill.