Salford and Oldham meet in an interesting fixture from the 19th Round of the English League Two. Salford have had an impressive improvement over the past month while Oldham have been losing match after match apart from one particular positive game.

Oldham are fortunate that League Two has just two relegation places, otherwise, they would have been in serious danger. No other team in the league has lost this many games since the start – 11/18. The match against Salford will be a serious challenge.

Salford have been improving. The team has not lost a game in nearly a month, although two of their three wins were for different tournaments. This does not change the fact that the team has played much better and are in much better form than their opponents – Oldham.

Saturday's visitors have lost more games than any other side in the league. They have been losing just the same in all other tournaments besides the League Two competition. We expect Salford to keep pushing and win the three points against one of the most convenient opponents this season. They will not get many such chances after this match.

Although Oldham have been terrible, the positive thing about their game is that they score goals despite losing most matches. If you look at their recent results below, you will see that they had 8/10 BTTS games in recent weeks. That means that both teams scored goals in their fixtures.

Salford are significantly better in defense but their goal difference remains negative – they have conceded 19 goals in 18 matches. We expect them to win this match but we also expect to see Oldham score a goal, as they have been doing in all recent games.

We expect to see this match go over 2.5 goals and you can generally bet on this market if you prefer it. We choose to stick to our traditional selection of over 1.5 goals for the favorite. The odds are slightly lower but you never know for sure if the weak visiting team will find its way to the goal. We are almost certain, however, that Salford will score twice.

Oldham have conceded at least two goals in half of their League Two away games this season and quite a few against some of the average teams. Salford have been improving, as mentioned above, and will be the dominant side in this fixture.

Top Betting Odds and Stats for Salford vs Oldham

FAQs regarding Salford vs Oldham 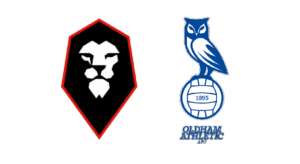 • In which places are Salford and Oldham?

Both teams reside in the bottom half of the standings. With a few more wins, Salford could easily push ahead and reach the upper places. For now, they are 16th with 21 points while their opponents from Oldham are 22nd with 15 points.

Traditionally, this match will start at 15:00 UTC on Saturday, November 27.

• Where will this fixture be played?

This game will be played at Salford's home ground – Peninsula Stadium, which has a capacity for 5,108 spectators.