This preview will go into the Italian Serie A match between Sampdoria and Napoli at the Stadio Comunale Luigi Ferraris.

The betting tips for this match have a lot at stake with Napoli trying to get into the Champions League qualification places. The best predictions for this game are:

Napoli have an awesome record against Sampdoria after managing five wins in just six games. The only other occasion when Napoli failed to win against this opponent – in the last six games – was in 2018. Even though both teams are defensively average, the offensive strength is likely to hand the happily with a small advantage and three points.

The recent matches for Napoli have witnessed a ton of entertainment, as Gennaro Gattuso’s men have been able to fight for three points whilst entertaining spectators. As a result, the Napoli matches have produced over 2.5 goals on numerous occasions in the last 10 games. Sampdoria have also been doing extremely well on the pitch with goals flowing at a decent pace. If not for the red card against AC Milan, Sampdoria could have easily picked up a win last weekend.

If the key objective was goals, this is one of fixtures which is able to deliver in bucket loads. In the last six meetings, the aggregate stands at 13-6 thanks to some big wins and matches. The reputation is likely to stand once again with Sampdoria being able to go toe to toe with opponents of a higher quality. Napoli have managed over two goals on average in the last six games.

Claudio Ranieri has every reason to be pleased with the kind of performances his teams have been offering in the last few games. The team could have certainly taken three points out of the match against AC Milan if not for the sending off. More such performances could see Sampdoria establish in the top half of the table. Albin Ekdal and Ernesto Torregrossa are unavailable for selection due to injuries, while Adrien Silva is suspended for the game.

The likelihood of even finishing in the runner-up position remains strong for Napoli, who are only four points away from AC Milan in the second spot. The recent uptick in performances have led to Gennaro Gattuso’s strong belief that he will be able to leave the club with a sense of achievement. The next five matches for Napoli would be a mixed bag with games against the likes of Inter Milan and Lazio on hand. Faouzi Ghoulam is the only injury concern for the manager.

FAQs about Sampdoria vs Napoli Coverage 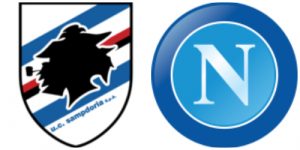 Stadio Comunale Luigi Ferraris is the venue for this match between Napoli and Sampdoria.

The favourite team to win this game and get the three points would be Napoli, who are at 7/10 to win the game.