Saturday's 2. Bundesliga program begins with a curious game from the bottom of the table. Two teams in the relegation zone will clash for the crucial three points that could save their season at a later stage.

Sandhausen and Erzgebirge Aue have been struggling throughout the entire campaign. More than half of the season is gone already and their time is running out. Which side will step it up a notch and claim the crucial three points?

The 2. Bundesliga is one of the rare leagues where the majority of games end with over 2.5 goals. While Sandhausen and Aue have not been particularly good offensively against stronger teams, in this case, they face each other and we expect to see goals from both sides and an easy over match. The teams played several games over the past couple of years and most had loads of goals. The previous fixture between them in August also ended with four total and a 1:3 win for Sandhausen.

Here is something that we wouldn't play in any other fixture apart from this one. Aue have always been the better team in head-to-head games and overall, we think that they might have a better chance to win this game although it is nearly impossible to predict. But since we expect a lot of goals, we choose to go for the underdog since Sandhausen have been terrible at home – just 6 goals scored in 9 fixtures. Aue's away performances have not been much better but they scored 9 in 9 games. The odds are high and deserve a shot but with a smaller stake.

Top Betting Odds and Stats for Sandhausen vs Erzgebirge Aue

FAQs regarding Sandhausen vs Erzgebirge Aue 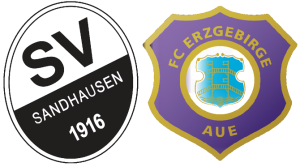 • In which places are Sandhausen and Erzgebirge Aue?

Both sides are fighting for their place in the league next season and for now, it is not looking good for either. Sandhausen are 16th with 17 points after 19 games while Erzgeburge Aue are 17th with just 15 points after 20 games.

Obviously, these are among the lowest-scoring teams or they would not have been so low in the table. Sandhausen have scored 20 goals in 19 games while Aue – just 17 in 20.

The kick-off time of this fixture is 12:30 UTC on Saturday, February 5.