We have one more match from the bottom of the League Two table and Scunthorpe will take on Colchester.

Colchester show signs of improvement and this match against the bottom team is the perfect chance for them to get three more points and save themselves from relegation completely.

This is an interesting game because most matches between Scunthorpe and Colchester end with loads of goals. At the same time, Colchester had more than 2.5 goals in 5/7 recent games. They also had both teams scoring in 5/7 recent games. Even so, Scunthorpe are the weakest team in the league and they struggle to score against any opponent. For instance, Scunthorpe scored a goal in just 4 out of their last 10 fixtures, which is the worst performance in the entire league apart from Leyton Orient's recent winless streak. We think that if we see goals, they will be on Colchester's side but we still do not expect more than two.

The visitors should be motivated for the win here as they are coming with a three-game defeatless run. This time, they are facing the weakest team in the league and Scunthorpe have won a single game in the last few months. We do not expect anything from the hosts but we aren't too sure about the Colchester win either. For this reason only, we prefer the draw no bet option instead of the clean win for the visitors. In the case of a draw, we will get our money back and lose nothing. Colchester managed to beat Scunthorpe once already this season with 2:1 but this time, we expect either 0:1 or 0:2.

There should be few corners in this match if we can base our bet on their stats. Both sides have taken few this season overall – Scunthorpe took 4.11 in their matches to date on average while Colchester took 4.60. At the same time, eight out of the last 10 games of Scunthorpe had less than 11 corners. On the other side, Colchester had less than 11 in 6/7 recent games. While our line is even lower – we expect a maximum of 9 – it should be an easy win given that neither side is strong in attack and corners are not a common thing.

Top Betting Odds and Stats for Scunthorpe vs Colchester

FAQs regarding Scunthorpe vs Colchester 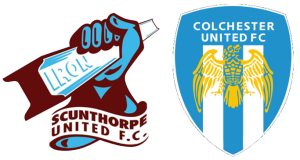 In which places are Colchester and Scunthorpe?

Scunthorpe and Colchester spent most of the season next to each other at the bottom but Colchester now have a chance to get a solid lead in front of the relegation group. The hosts remain last with 24 points while Colchester are now 19th with 36.

This match will take place at Scunthorpe's home ground – the Sands Venue Stadium.