Following a win in the Korean FA Cup, Seoul returns to K League 1 to play against Gimcheon Sangmu in the next engagement on Saturday, 28 May. Both teams are on the losing sequence of the domestic league.

Seoul ended their losing streak in the last meeting of the Korean FA Cup and won their third game of the last five attempts. However, Gimcheon are yet to win from the previous four league games, losing three in that course. Seoul will also be confident over the home advantage where they have registered four victories in the last five outings. Moreover, the Gimcheon Sangmu won only one of the last five visiting H2Hs against Seoul. For these reasons, we base our predictions on Seoul taking three points at the end of the duel.

Seoul seems prepared at their offensive touch as they have rattled the net at least twice in three of the previous five home attempts. In opposition, Sangmu couldn’t make a momentum of positive results but they managed to add eight goals in the last five away outings. three of the recent four H2Hs at the home of Seoul have also gone with over 2.5 goals. So we can expect a high total between the teams this time again.

Gimcheon has got consecutive defeats in the recent visits, however, they succeeded to score at least once in all of their last five away outings. Seoul has also found the target in six of the previous seven home outings. The hosts should also have many chances as the visitors have leaked the goals consistently in their recent attempts. So our third pick for this game would be a BTTS outcome, the same as the three of the last four H2Hs at Seoul’s home.

After making an exceptional comeback in the second half, Seoul took the lead of 3-1 in the last game against Jeju United and booked their place in the Quarter-Finals of the Korean FA Cup. having four wins and five draws, Seoul are seventh in the points table. four players will be unavailable for the club gaffer, Ik-soo An.

Sangmu got their successive second league defeat in the last game against Ulsan Hyundai. The team has lost six games out of the 14 attempts of the campaign and finds itself at a ninth of the table. Hyeon-cheol Jeong and Eon-hak Ji will be out of the field due to medical issues.

Top Betting Odds and Stats for Seoul vs Gimcheon Sangmu

FAQs regarding Seoul vs Gimcheon Sangmu Coverage and Accessibility 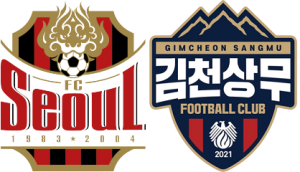 Where is the game being played? Seoul World Cup Stadium (Seoul).

Who won the last Head to Head fixture? Gimcheon Sangmu won with a 2-0 scoreline.