CFR Cluj host Shakhtyor in the second leg of the semi-finals of the Europa Conference League Qualifiers on Thursday, 11 August. Both teams enter the field on the back of an unbeaten sequence.

Cluj are undefeated in the last four games and have made turns of wins and draws. On the other hand, Shakhtyor has also won three of the previous four outings and held an unbeaten streak at away venues as well. However, the CFR People have a momentum of three consecutive wins at home. The Moles were also restricted to a draw at home in the first leg. So following the home advantage, we expect CFR Cluj to confirm the lead in this game.

The last meeting between the teams ended without goals but we expect a different outcome at the home of Cluj. The Railwaymen have found the back of the net eight times in just the last three hosting games. On the other side, the Miners have also been able to score at least twice in four of the previous five away outings, having a total of nine goals in that course.

The front line of the Cluj People will be confident to get on the score sheet as they have scored in all of the home attempts since the start of May. Shakhtyor has also managed to find the target in four of the previous five visits. The Moles also leaked goals in four of the previous five outings of various competitions. Hence, a BTTS pattern will be our next prediction for this game.

The Railwaymen registered their third victory of the four league outings in the last game against Chindia Targoviste, playing away from home. CFR Cluj is also present at the top of the table in the Romanian league. The club manager Dan Petrescu will have a completely healthy squad for the selection of this game.

The Miners couldn’t extend the winning streak in the last game and ended in a 0-0 draw, playing the home leg against CFR Cluj. Shakhtyor has won five of the last six attempts of Vysshaya Liga. The club gaffer Sergey Tashuev will have zero fitness issues in the team ahead of this game.

Top Betting Odds and Stats for CFR Cluj vs Shakhtyor

FAQs regarding CFR Cluj vs Shakhtyor Coverage and Accessibility 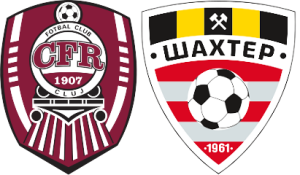