Shandong Taishan face Daegu in the opening round of the AFC Champions League and the expectations are extremely high.

Shandong Taishan are the current champions in the strong Chinese league while Daegu are in rough form and their chances in Korea seem impossible even this early in the campaign.

Shandong Taishan had an incredible season and deservedly became the champions. In 22 games last campaign in China, they conceded just 16 goals. In their AFC CL opener, they face Daegu who had good results last year but have been in terrible form right now and barely qualified for the tournament. We do not expect to see the visitors score in this fixture and the odds will be satisfactory once released.

At the moment of writing, the odds for this game have not yet been released but we know one thing for certain – Shandong Taishan will be the big favorite to win this match but we also expect the odds to be good enough for a single bet. Shandong won the strongest Asian league – the Chinese – and they have a massive budget when compared to Daegu. These two teams can literally not be compared in each way. The hosts are in a series of 20 games without a defeat too.

Shandong Taishan were not as active on the transfer market as other Chinese sides but they still got some serious players that will make them even stronger. They added two Brazilian players to their squad, most notably – Cryzan from the Portuguese Santa Clara. They have huge ambitions this season and for the AFC Champions League.

When compared, you can see the difference in worth of both squads – Shandong's squad is worth enarly 20 million euros while Daegu's squad is about 11 million. They have a solid young squad composed mainly of Koreans but they are far from the best teams in the Korean elite and will have serious difficulties in this fixture and the Champions League overall.

Top Betting Odds and Stats for Shandong Taishan vs Daegu

FAQs regarding Shandong Taishan vs Daegu 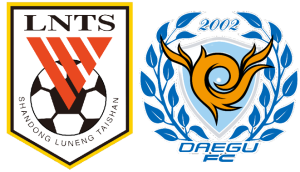 In which places are Shandong and Daegu in their leagues?

Daegu started the season in a terrible way and are currently one of the weakest teams at 10th place out of 12 teams. On the other side, the Chinese Super League has not yet started, so Shandong have not played any official games this season yet.

This match has been scheduled for Shandong Taishan's home ground – Luneng Big Stadium.

This match has been scheduled for 12:00 UTC.