In this Super League fixture, Tianjin Tigers make the port of call at Kunshan Stadium. Shanghai Port eagerly awaits the arrival of Yu Genwei'e men in their bid to overtake Changchun Yatai on the leaderboards.

Since 2013, Shanghai Port and Tianjin Tigers have clashed seventeen times. The result has always been in favour of the former who have never lost to the Tigers, accumulating twelve wins in the process. The Red Eagles are unbeaten in their last six matches in the Super League and head into this fixture to claim the top spot in the points table. We expect them to make little work of the Tigers who are in their last eight away trips.

Tianjin Tigers have been woeful on the road and have only scored four goals in five matches. Shanghai Port's unbeaten home run in the same period has seen them score 11 goals with just one in return. The hosts can be relied upon to score with or without contribution from the Tigers. We should see goals on the night as the Red Eagles look to improve their scoring record to oust Changchun Yutai from pole position.

In their last nine away trips, the Tianjin Tigers have only scored three goals, being shut out five times and keeping one clean sheet in the process. During the same run of matches, only one match involving Shanghai Eagles has seen both sides get on the scoreboard. With both sides showing a tendency of clean sheets in their respective fixtures, this match should follow the established pattern. Both sides will not get on the scoreboard as Shanghai Port takes on Tianjin Tigers.

The Red Eagles are enjoying second place and an equal number of points as Changchun Yutai. However, they will not be pleased with their most recent result as Habei dealt them their second defeat of the Super League campaign. Despite creating 11 goal scoring opportunities, they failed to trouble the scorers. They cannot let up again with three teams hot on their coattails in search of league glory.

Yu Genwei has a tough task on his hands as he leads Tianjin Tigers to the Pudong Football Stadium where they look for their first league victory over Shanghai Port in 17 attempts. The manager could not have hoped for a worse time to pick this agenda as the Tigers have a poor travelling record this season and have not won on the road once in six attempts.

FAQs regarding Shanghai Port vs Tianjin Tigers Coverage and Accessibility 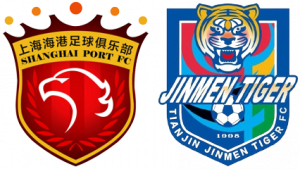