Gamba Osaka makes the trip to the IAI Stadium Nihondaira for their next J1 League outing. They have a tough task on their hands as second-placed Yokohama F. Marinos could only manage a 2-2 draw against Shimizu S-Pulse.

Despite boasting of just 30 per cent of the possession and being pegged in their own half for the duration of the fixture, Shimizu S-Pulse 2-2 draw against Yokohama F. Marinos. They will fancy their chances against Gamba Osaka given their poor scoring rate that stems from their inability to pierce defences. We anticipate a cagey affair at the IAI Stadium Nihondaira, where S-Pa should do just enough to take the advantage and deal Gamba Osaka their third defeat in succession.

Three of the last four meetings between Shimizu S-Pulse and Gamba Osaka have finished with less than three goals. That was in the past and the situation is direr in the current campaign. S-Pa are barely averaging over one goal per match with a tally of 24 goals from 23 outings. Gamba Osaka are worse in the attacking department, sending 17 strikes past their rivals from the number of games. Given their poor scoring, especially the Nerazzurri's haplessness, we expect the match to finish with an Under 2.5 goals scoreline.

The last time S-Pa managed a clean sheet against Gamba Osaka at the IAI Stadium Nihondaira was four years ago in July 2017. While the hosts have only kept two clean sheets in their last ten outings while being shut out twice in the process. Meanwhile, Gamba Osaka has shut out their rivals thrice in the same period and only failed to trouble the scorers once. Based on these statistics and the importance of securing the result, we expect only one side to get on the scoreboard in this J1 League encounter.

S-Pa showed immense resolve in securing a 2-2 draw against Yokohama F. Marinos. The Tricolor bossed them around but were caught napping at crucial moments of the game. Miguel Lotina will be pleased with the efforts of Eiichi Katayama and Kenta Nishizawa in the fixture and will want more from his squad against Gamba Osaka. S-Pa have not won against the Nerazzurri at the IAI Stadium Nihondaira in four attempts and have the elements against them with Renato Augusto, Yoshinori Suzuki and Takumi Kato unavailable due to injury.

After registering three wins on the trot and getting out of the relegation slots, Gamba Osaka are struggling in J1 League again. Last season's runner ups were outsmarted by Tokushima Vortis, who created twice as many chances and were more clinical than them despite accruing the majority of the possession. This fixture highlighted again their failings in the scoring department and they need to address them. Masanobu Matsunami will want a positive result against a direct relegation candidate but has multiple injury concerns in the squad. Ryu Takao, Jun Ichimori, Won-ho Shin and Haruto Shirai are all unavailable for selection.

FAQs regarding Shimizu S-Pulse vs Gamba Osaka Coverage and Accessibility 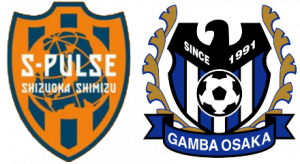 Who are the bookmakers' favourites to win?