Second meets third in Europa Conference League group F with Slovan Bratislava vs PAOK. Both sides sit level on 7 points with only Bratislava’s superior goal difference proving the difference between the two. With Copenhagen taking on the Lincoln Red Imps, a match the Danish side should win comfortably, a defeat for either side will leave them on the verge of elimination, a draw will see qualification move to the final round of fixtures.

Domestically both sides head into this match in good form with Slovan Bratislava sitting top of the pile in the Slovakian league and PAOK third in the Greek League. In what is a very tricky match to call between two evenly matched sides, this game could be a classic case of both sides not wanting to lose and taking their chances down to the final game. Greek sides in Europe aren’t the best travellers but with a lot on the line here we will back PAOK to get something from this game. When these sides last met in the group stage it ended 1-1 and we will back another tight contest here.

Due to the position of both of these sides, this could be a game that is on the tight side with both teams desperate not to lose this game. When looking at the recent form of these two sides, it’s hard not to be convinced in thinking that the goals are going to fly in! PAOK have seen both teams score in seven of their last eight matches whilst whilst Slovan have seen both teams score in two of their last five. The last encounter between the two ended up being a score draw and we will back that scenario once again.

Perhaps the most difficult market to back considering the qualification implications that surround this game, but we will back the over 2.5 goal market with a slight degree of caution as it could be a game that turns cagey. Slovan have seen the over 2.5 goal market exceeded in five of their last six, whilst PAOK have seen the over 2.5 market exceeded in seven of their last eight! Yes, this game could be nervy and tight, but those stats are just too hard to ignore and we will be hoping for a high scoring draw here.

The Best Match Odds for Slovan Bratislava vs PAOK 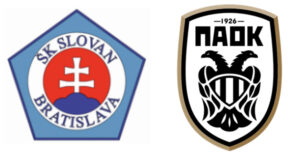 The match will be played at the home of Slovan at the Tehelne pole.

These sides have met three times. Earlier in the group stage it ended 1-1. The sides have met two previous times in the Europa League back in 2019, with both sides winning one of their two group games.

What is the kick-off time for Slovan Bratislava vs PAOK?