Southampton will face Everton in a curious fixture from the 9th round in the Premier League on Saturday.

Southampton and Everton are next to each other in the table but the teams have had completely different results this season. Here are our predictions.

Everton are an interesting team. They sold their best player and main striker – Richarlison, and then did not replace him. This has resulted in them having one of the weakest attacks in the league this season and they barely score a goal per game, if they even score. The more important fact is their strong defense – they almost do not concede goals either. This is why we do not expect much from this game against Southampton, who do not have a very strong attack overall.

It is weird to see Southampton as such big favorites against Everton even though Everton have been struggling in general. At the same time, the visitors have not lost a game since the 2nd round, so six games in a row without a defeat in all tournaments. This makes for four draws and one win in the previous round. The team definitely knows how not to lose but they also rarely win due to the problems in attack. You cannot win without scoring goals and Everton do not have players that can score a lot of goals.

Most of Everton's games this season ended in draws and in three out of four draws in the Premier League, the full time result was 1:1. We expect the same in this particular game and if you are looking for higher odds, this is the perfect game for a 0:0 or a 1:1. Southampton will look for an improvement after losing three out of their last four games but Everton's defense should not concede more than one goal in this match

Southampton did not sell a single player in the last transfer window but attracted almost an entire new team for aboit 70+ million euros. There is a lot of potential in the team with the young squad they build and they have already showed some crazy performances like the win over Chelsea. We expect Southampton to grow and improve as the season progresses but we mostly expect good things from them in one or two seasons time.

Everton have been struggling for the past couple of seasons and the majority of the Premier League fans expect them to be one of the teams that will get relegated at the end of the campaign. They did not attract too many good players and the sale of Richarlison left them completely deprived of a leader in attack. The team does not concede too many goals overall but in attack, they do not have a strong scorer.

Top Betting Odds and Stats for Southampton vs Everton

FAQs regarding Southampton vs Everton 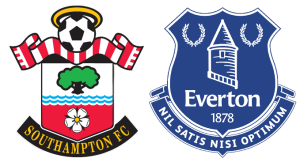 In which places are Southampton and Everton right now?

These two teams are currently situated next to each other in the table. Everton are 13th while Southampton are 14th – both with 7 points each.