Bromley head into this mid-week fixture with some unexpected rest behind them, thanks to their Saturday match against Halifax being postponed due to an unplayable pitch. They will be hoping to make the most of a few days off as they make the trip to Southend. Southend who are having their first season in the National League following their relegation from League 2 have had a tough start and find themselves in 15th place in the table.

Bromley head into this contest bang in form following five successive wins. Their win streak has seen them fly up the table and they will be full of confidence ahead of this crunch clash. Southend’s form has very much been on the rise in recent weeks thanks to four wins and one draw in their last five matches and they will be hoping for a late season push for the playoffs. Considering the form that these teams are in this makes it a tough match to bet on. Both teams would probably take a point ahead of the game and thats what we think might happen. At odds of 23/10 it might be a good way to play.

In what could be a great game between two teams bang in form we think the play could be on backing the under. Southend have only seen over 2.5 goals in two of their last five matches which is exactly the same record as Bromley. These sides have only met once before with the game ending as 1-1 and it might be a similar case here.

Interestingly Southend have won their last four games home games 2-1, so they are prone to conceding goals at home, away from home Bromley have scored in four of their last five away matches. With both teams finding the back of the net regularly the smart bet has to be on both teams to score.

The Best Match Odds for Southend vs Bromley 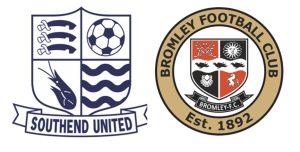 This game will be played at the home of Southend at Roots Hall.

These teams have only played once before in their history with the game ending 1-1.

What is the kick-off time for Halifax vs Bromley?