This preview looks into the game between Kosovo and former world champions Spain in the World Cup qualification group.

This prediction and betting tips will focus on the Group B, which witnesses Spain up against Kosovo for their second home game of the qualification campaign.

Spain might have picked up the first win in the group stages of their World Cup qualification campaign, but the team has not been impressive so far. Against Georgia, Spain only had two shots on target. The contribution from Kosovo might not be huge in this game considering that Bernard Challandes’ men have very little quality compared to the opposition. Due to Spain’s poor form, this match is a better pick to witness under 3.5 goals.

Alvaro Morata failed to find the back of the net against Georgia despite playing the full 90 minutes. The Juventus striker, though, was on target in the opening group match against Greece. This would be the first time Morata comes up against Kosovo. The 28-year-old has not been in great form, but the quality of the opposition makes him a likely candidate to score anytime.

Spain to win at half-time/full-time

Spain are strong favourites to get a victory. Luis Enrique’s men lead at half-time in the opening group match against Greece. Even though it took them quite a while to establish the lead against any defence of Georgia outfit, the 2014 world champions are expected to take this game from the word go.

There is a tremendous need for three points for Spain to ascertain their position as the top team in the group. The narrow win over Georgia does not instil confidence within the former world champions, who have already seen Sweden take a two-point lead in the group. There will be considerable pressure from Greece if the mediocre run continues. Spain need to convert possession into goals and players like Alvaro Morata have to fire on all cylinders. Gerard Moreno is doubtful for the match against Kosovo.

A number of injury problems will have a huge impact on the line up put out by Bernard Challandes. Even though Kosovo were unable to build on the impressive friendly win over Lithuania coming into the World Cup qualifiers, the team were not expected to make a huge impact anyway. Kosovo have a tendency to perform very well when they are playing at home. Betim Fazliji, Amir Rrahmani, and Bernard Berisha are a few of the players unavailable.

Top Betting Stats and Odds for Spain vs Kosovo

FAQs regarding Spain vs Kosovo match 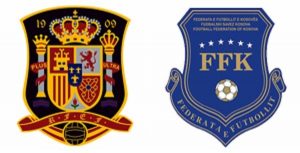 This match will take place at the Estadio La Cartuja de Sevilla in the Spanish city of Sevilla.

Spain are the strong favourites to win this game at odds of 1/9.