SPAL host Cosenza in one of their most important matches of the season to date in the 33rd round.

SPAL and Cosenza are fighting for the same goal – to remain in the league at the end of this season. SPAL are in a much better position and a win here will seal their place in the league which makes the game a lot more important for the visitors.

SPAL have slightly better stats than Cosenza overall but both teams share the same problems – their defenses are quite bad and their attacks are not among those that score a lot of goals. The previous match between them ended in a 0:1 win for Spal and we do not expect to see over 2.5 goals in this fixture either. It is true that both teams had several overs recently but this match is of higher importance since they are direct opponents for the relegation.

There is a good chance that we will see a draw here because SPAL have not won a lot of games lately and they generally struggle in most games. Nevertheless, Cosenza's form is even worse and they have been losing all of their away games in recent weeks and months. They lose even against weaker teams than SPAL, so the draw is possible but we do not expect it.

We have two more teams that have had games with few corners in recent months. Nine out of the last 10 for SPAL ended with less than 10.5 corners. Five out of the last six for Cosenza also had less than 10.5 corners. Overall, Cosenza have had the lowest average corners per game in this season – 8.74 corners per match while SPAL had an average of 10.06 corners in their matches this year.

SPAL have been above the relegation zone for a while and they have a good lead at this point although mathematically, several of the teams below them can pass them with a good series of games. SPAL did not make good chances to their squad in the transfer window and they continue to struggle as in the entire season to date.

Cosenza have been among the weakest teams since the start of the campaign and they have six more rounds to prove that they deserve to be in the league next year. They should at least try to reach the play-in spots from the relegation zone, which will give them an additional chance to seal their spot.

Top Betting Odds and Stats for SPAL vs Cosenza

FAQs regarding SPAL vs Cosenza 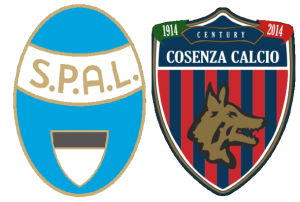 In which places are SPAL and Cosenza right now?

SPAL have had a rough season and we expected more from them. Right now, they are 15th with 33 points. Cosenza are below them at 18th place with 24 points right now.