In this Serie B fixture, SPAL takes on the challenge of Crotone at the Stadio Paolo Mazza. The reverse fixture saw the House of Este earn an away win and they will be looking to complete the double in Ferrara.

Neither SPAL nor Crotone are in a form to incite confidence. The hosts are winless in six competitive affairs while the Pythagoreans seek a triumph for a fifth game running. The House of Erste claimed the three points on offer in the reverse fixture and we believe should end their search of a win in this meeting. With Crotone failing to register a win in 18 attempts on the road, our selection should pay off.

Goals have come at a premium for SPAL and Crotone. Both sides have scored five goals apiece in their last five outings, highlighting their issues in the final third. As they fix their sights on each other for this Monday afternoon fixture, we expect one set of attackers to draw a blank. With the Pythagoreans struggling on the road, Spal should take the points in this low scoring affair.

Putting your money on Crotone in this fixture will be folly. They have been woeful on the road and do not inspire any warm feelings. This puts SPAL in good stead but they have been marred by their own problems. With both sides battling relegation, caution will be in the air, especially for the hosts. They will look to get the lead and hold on to it, forgoing any adventure afterwards. As a consequence, we believe it will be a 1-0 result in favour of the House of Erste in this meeting.

Lecce added to SPAL's woes in the last round as their winless run stretched to six games. Roberto Venturato will need to rouse his charges from sleep as they sit just one place above the relegation slots. They will feel confident against Crotone, who have struggled on the road this season. However, it will not be easy as they themselves are winless in four home fixtures.

Serie A proved to be too tough for Crotone last season. A return to the familiar surroundings of Serie B was supposed to stabilize them but it has not gone according to the plan. They are on course to another demotion and only have themselves to blame. They are without a win on the road in 18 attempts, while their home form is equally worse although slightly better.

Top Betting Odds and Stats for SPAL vs Crotone

FAQs regarding SPAL vs Crotone Coverage and Accessibility 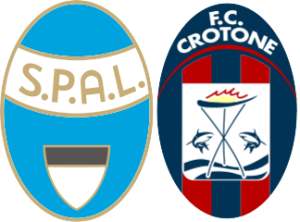 Who won the last Head to Head fixture? SPAL won with a 1-2 scoreline.