SPAL will host Frosinone in another important fixture from the second-to-last round in Serie B this season.

Both teams need the win to guarantee their goals for this season – Frosinone are fighting for a place in the playoffs while SPAL need three more points to secure their place in the league.

Frosinone's recent games have been incredible – 4:1, 4:4, 2:1, etc. Overall, no other team has been having so many goals in their games and the important thing is that they mostly concede goals too. SPAL are the much weaker team out of these two but they also score in most of their games, especially at home. Four out of the last five games of SPAL ended with both teams scoring goals too.

SPAL have been having draws almost every round over the past couple of months, which is the reason why they are now back in the relegation battle. Frosinone's recent games might suggest some incredible form but those come only in home games. On the road, Frosinone has not won a match in eight consecutive games, most of which were defeats. We do not think that SPAL have a chance to win this but Frosinone's away form suggests that they will have a hard time winning too.

SPAL are actually one of the teams that won the fewest games this season. They are ranked second in most draws this season and had 15 out of 36 games to date. They have serious issues in attack while their defense concedes too many goals. We thought they are safe from relegation but unless they win one of their last two games, we might see a shocking turnaround and SPAL finishing in the bottom places.

Frosinone have been one of the top teams this season but their recent away form almost put them behind the playoffs. Fortunately, they have been extraordinary at home and one more win in the remaining two games will seal the deal for them. After 36 rounds, they lost only 8 games and their goal difference is 57:40.

Top Betting Odds and Stats for SPAL vs Frosinone

FAQs regarding SPAL vs Frosinone 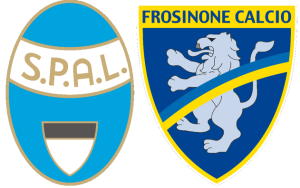 In which places are SPAL and Frosinone?

There is a huge gap between these two sides and an obvious difference in class. SPAL are 15th right now and have just 36 points while Frosinone are all the way up at 8th place and have 58 points.

This fixture has been scheduled for SPAL's home ground – Stadio Paolo Mazza.