Trnava will face Rakow in one of the most interesting fixtures of the Rakow Czestochowa vs Spartak Trnava Semi-Finals on Thursday, August 11.

On the back of a winless streak, Spartak Trnava makes a trip to Rakow Czestochowa for the second leg of the semi-finals of Europa Conference League Qualifiers. Medallions focus on extending their home winning streak in this game.

Medallions have scored in almost all of the recent hosting games and missed the chance only once in a friendly game. But they have also leaked three goals in the last three attempts. On the contrary, regardless of the inconsistency, Trnava has been on the score sheet in six of the last seven outings. But the White Angels leaked goals in all of the last six games. So the chances are high to see this game with a BTTS outcome.

Rakow lost the last game at the away venue but they had a streak of consecutive six wins before that. Medallions have also won three hosting games in a row before this duel. However, Trnava are lacking consistency and has won only once in the last five attempts, together with two defeats and two draws. The White Angels also conceded a defeat in the home leg against Rakow previously. Hence, Medallions will be our favourites to take the lead in this duel.

Rakow has scored at least three goals per game in three of the previous five home outings, adding a total of 12 goals in that course. On the other hand, Trnava has also managed to hit the target nine times in the previous five visits, scoring at least twice in four of them. The White Angels also leaked goals in all of the recent outings. Given this, a high-scoring total will be our next prediction for this game.

Medallions terminated their winning streak of away outings in the last game against Gorkin, losing by a narrow lead of 1-0. Rakow thrashed Astana in the last round with the final aggregate of 6-0 to enter this phase. Tomas Petrasek will miss out on this game due to medical concerns.

The White Angels concluded their consecutive second game of Fortuna Liga in a draw of 2-2 against Zilina. Spartak Trnava won both legs of the previous round against Newtown and got the advancement to this round with a 2-6 aggregate. Dobrivoj Rusov and Kazeem Bolaji are on the injury list ahead of this game. 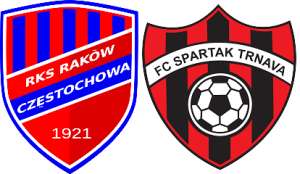