Stevenage stepped it up a notch and recorded some wins and draws recently. They now face Bradford City, whose season has been better than average but their huge number of draws has prevented them from being a serious contender for promotion.

Stevenage spent most of the season at the bottom and it is evident in the previous head-to-head game from August – Bradford City won with 4:1. This game promises to be different as the hosts are not the same team any more.

Stevenage and Bradford City played quite a few games in recent years and most of those ended with both sides scoring goals. Plus, most had over 2.5 goals, so if you prefer this alternative, go for it. Bradford have one of the highest BTTS percentages in the entire league and we expect to see another such result. The team had it in 69% of their games to date. Stevenage have improved immensely and they scored quite a few goals since the start of the year – we expect to see at least one or two from them here as well.

Obviously, it is hard not to expect a draw in this fixture. We have two teams that have had an impressive number of those – 13 for Bradford and 11 for Stevenage. Moreover, Bradford have been performing quite well on the road lately. Yet, we think that Stevenage have a better chance to win here and in the case of a draw, we will get our money returned. And yet, Stevenage have really shown us a different face in their home games and won 3 out of their last five. Moreover, they scored more than 2 goals in 4/5 recent home games. The team has really been creating a lot of chances and we expect them to be the better side on the pitch.

Neither team is particularly active in this aspect of the game – they generally do not take a lot of corners per game. Especially in Bradford's case, the team did not take almost any in its recent games. For example, 3.20 on average in the last five rounds. This number is almost identical to their all-season stats in away games – 3.53 corners per match. We expect a low corner count in this fixture, so it is also possible to focus on the overall corners market if you prefer it.

Top Betting Odds and Stats for Stevenage vs Bradford

FAQs regarding Stevenage vs Bradford 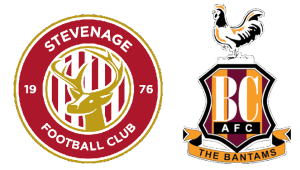 • In which places are Stevenage and Bradford City?

Both sides are around the middle of the table currently although Bradford City stand much closer to the promotion zone – 12th with 37 points. Stevenage are getting closer as well, especially if they continue with the good results – 16th with 32 points.

• What are the goal differences of these two teams?

Neither team has been among the highest-scoring sides and in Stevenage's case, their goal difference remains terrible – 30:45. Bradford City's stats are symmetrical – 35 goals scored and 35 goals conceded.

This game has been scheduled for 19:45 UTC on Tuesday, February 8.