Cambridge have almost secured their spot in the next stage but if they lose with a big difference on Tuesday, they could potentially lose this place. Stevenage need the three points if they want to keep their chances but a win against Cambridge will not be an easy task.

Stevenage need to step up their game against a team from a higher division and hope for a good result in the other fixture between Tottenham U21 and Oxford Utd.

Cambridge were impressive in their first two matches of the group and conceded just 1 goal. This will be their first away match in the cup and we are uncertain about what they could bring to the table. We are certain, however, that Cambridge have conceded at least one goal in 8/9 away matches this season and not always against good teams. Stevenage are not a terrible home team and we expect them to score at least once. They managed to score 3 times against Tottenham at home in the previous round.

One of the two sides will get the points in the end because EFL Trophy matches do not end at draws. This option, however, exists for the regular time period and we expect to see it between Stevenage and Cambridge. Tuesday's hosts are quite good at home and often have draws – half of their league games this season. Cambridge have similar stats away from home in League One – the team has not been perfect and already has 3 draws in 7 matches. We expect to see leveled performance in this match and a draw at full time.

Top Betting Odds and Stats for Stevenage vs Cambridge

FAQs regarding Stevenage vs Cambridge 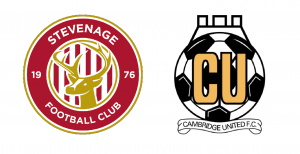 • How many goals have Stevenage and Cambridge scored in the EFL Trophy this season?

Both teams have an equal number of goals scored but their defensive stats are quite the opposite. Both sides have scored 5 goals in 2 matches for the cup.

• How many goals have Cambridge scored in League One this season?

Cambridge's performance has kept them close to the promotion zone but they need to step up their game if they want to achieve anything in the league. In 16 matches, they have scored 22 goals.

Tuesday's fixture will be played at Stevenage's home stadium – Broadhall Way, which has a capacity of 7,800 spectators.