Stevenage and Port Vale meet at The Lamex Stadium to battle it out for three League Two points on Saturday. Read our expert predictions and find the top odds for the fixture below in our match preview.

Stevenage could go joint top of League Two with a victory over Port Vale on Saturday. Read our top three predictions for this weekend’s contest below.

Stevenage slipped to a heavy 4-1 defeat at title candidates Bradford City in midweek, though we’re tipping Borough to rebound with a win this weekend. Alex Revell’s men had won three matches on the spin before their reverse to the Bantams and they should have enough confidence left in the tank to beat a Port Vale team that has yet to win a single game this term.

While we expect Stevenage to pocket the points on Saturday, there is a chance Port Vale could notch a consolation and we recommend backing both teams to score as a result. The Valiants failed to score in their last two games (0-0 vs Tranmere and 0-0 vs Carlisle), though they mustered an impressive 26 attempts in those games and they have been creating plenty of chances.

A good chunk of the action seen in Stevenage’s matches this season has arrived before the half time interval, indeed eight of the 12 goals plundered in their fixtures so far were registered inside 45 minutes. That record makes for compelling reading and a wager on the first half seeing more goals than the second against Port Vale appeals with that in mind.

Stevenage are expected to be in the playoff shakeup this season, so their 4-1 defeat to promotion rivals Bradford in midweek was a bit of a rude awakening. With three wins on the bounce before that in league and cup, The Boro had shown promising early-season form before that however and they are favourites to beat Port Vale for the second time in a row at The Lamex Stadium as a result.

Port Vale have been performing below expectations in the early weeks of the 2021/22 campaign, though it should be noted that they had a tough set of opening fixtures against Northampton, Tranmere and Carlisle. Nevertheless, manager Darrell Clarke would have expected a bigger haul than his team’s meagre two-point haul from three contests.

Top Betting Odds and Stats for Stevenage vs Port Vale 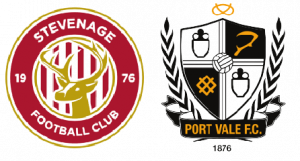 Saturday’s game will be played at The Lamex Stadium.

Stevenage and Port Vale have met on numerous occasions. The last meeting between the clubs finished 0-0 on February 23.