Ninth meets fourth in League Two when Stevenage host Swindon on Saturday. Read our free predictions and find the top odds for the game below in our detailed match preview.

Swindon put their perfect away record on the line when they visit Stevenage this weekend. Read our top three predictions for Saturday’s fixture below.

Swindon have been one of League Two’s most defensively robust teams since the summer and their well-drilled backline makes them a tough team to beat, especially on the road. The Robins have won two out of two assignments on their travels and they look excellent value in the double chance market this weekend against a Borough team in the midst of a five-match winless run.

Ben Garner’s Swindon have been doing some impressive work defensively this season and they seem to be improving in that regard game by game. Town have kept a clean sheet in four of their last five matches in all competitions, though their return of just three goals at the opposite end shows that their defensive focus comes at a cost. With those factors acknowledged, we’re tipping under 2.5 goals to land for the fourth Swindon fixture on the trot.

Swindon’s mean defence could swing another bet our way in the team goals market on Saturday. The Robins have conceded one or fewer times in four of their first five League Two matches this term and Stevenage should toil against them just as others have done. With Borough unlikely to have many chances to register, backing them to notch under 1.5 goals could reap dividends.

Stevenage are in the grip of an early-season slump and Borough’s cup reverse in midweek to Tottenham Hotspur U21 pushed their winless run to five fixtures in all competitions. Their victories over Scunthorpe and Bristol Rovers in the campaign’s early exchanges already feel like a lifetime ago and Stevenage have been conceding far too often at home, including seven in their last three matches on their own patch alone.

Ben Garner’s is starting to build some momentum with Swindon and the new Robins boss has been winning plenty of supporters over thanks to his team’s defensively sound performances. Town haven’t quite got going in the attacking third yet, though they have a solid platform to build on with their displays at the back.

Top Betting Odds and Stats for Stevenage vs Swindon 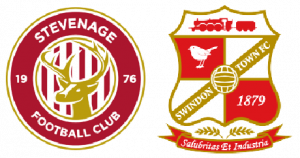 Saturday’s game will be contested at the Lamex Stadium.

John Brooks will take charge of proceedings this weekend.