Stevenage face Tranmere in the second-to-last fixture from the 44th round in League Two on Saturday.

Tranmere returned to the playoff zone with their recent win and a lot of luck and now have to win the three points to feel safe.

Tranmere are the team that has had the fewest goals this season and they almsot never have over 2.5 goals. Out of 43 rounds this season, they had only 11 games with over 2.5 goals. Their defense is one of the three strongest in the league while their attack is effective without scoring too many goals.

While Tranmere are one of the weaker away teams from the top of the league, Stevenage are one of the weakest teams in general and it will be a surprise to see Tranmere lose in such an important match. Both teams need the three points here but we expect a good result for the visitors. They lost a single match in their last five and while Stevenage have been in their best form to date, it's the X2 for us.

Stevenage were one of the weakest teams throughout the entire season but the most important fact is that they improved in the most important times – now, when the season is coming to an end. They are a few points above the relegation zone with an additional match to play. Even if they lose this match, their chances are great and we will see them in the next League Two season too.

Tranmere spent the entire season below the leaders in the table and we had no doubts that they will qualify for a direct promotion. Nevertheless, they had a rough run over the past couple of months and even fell below the promotion zone at one point. They are back in it now but need all the points they can get.

Top Betting Odds and Stats for Stevenage vs Tranmere

FAQs regarding Stevenage vs Tranmere 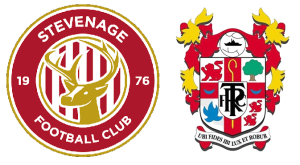 In which places are Stevenage and Tranmere?

Obviously, these two teams are on the opposite ends of the table. Right now, Stevenage are four points above the releagion zone at 22nd place with 41 points. On the other side, Tranmere are 7th right now with 69 points.

This match has been scheduled for Stevenage's home ground – Broadhall Way.