Stockport will face Barrow in another curious fixture from the first round in League Two on Saturday.

Stockport were the top team in the National League while Barrow were one of the weakest in League Two – in other words, they should be on the same level. Here are our predictions.

Stockport were absolutely dominant in the previous campaign and will certainly have the motivation for a good start. The team scored 87 goals in 44 games last year and had the 2nd best defense in the league. On the other end, Barrow had one of the weakest attacks in the league but their defense is actually quite good. We do not expect much from the visitors but strong defense, which suggests an under 2.5.

Stockport are a massive favorite ahead of this match and it is even surprising. The truth is the top team in the National League is much better than the worst in League Two and we expect Stockport to win this match with absolute ease. We do not expect a huge result, however, maybe something like 1:0 or 2:0 max. There is value in this bet and we think that Barrow have not improved enough to contest it.

Perhaps there are expectations for a high-scoring game but we do not see that. Barrow had serious issues in attack last season while Stockport were absolutely incredible in defense. They conceded just 17 goals in 22 games last season at home while scoring 44 too. We think that they will be the only side that scores goals in this fixture. Barrow had 19 goals in 23 games on the road last season too.

The season in the National League last year was truly interesting until one point when Stockport started dominating. The team had multiple unbeaten runs and won the league with 94 points after 44 games. Their goal difference was 87:38 after 44 rounds. They made more improvements and signings in the off-season and their form seems to be perfect.

Barrow struggled throughout the entire last season and only managed to save themselves from relegation due to the poor performances of Oldham and a couple of good wins at the end of the campaign. The team had a goal difference of 44:57, which also means that they are among those with the lowest-scoring games in the league.

Top Betting Odds and Stats for Stockport vs Barrow

FAQs regarding Stockport vs Barrow 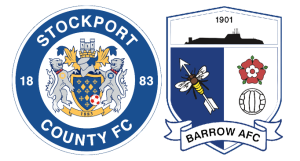 This fixture has been scheduled for Stockport's home ground – Edgeley Park.

This fixture has been scheduled for 15:00 UTC like the entire round.