The best meet the worst in the most obvious game of this round in the National League. How will Dover deal with Stockport, who have been absolutely outstanding this season and in recent weeks, in particular?

Stockport are on a 7-game win streak in the league and 9 in all tournaments. Dover, on the other hand, won their first match of the season a couple of weeks ago. They have been the weakest team in the league and are surely getting relegated at this point.

Over 3.5 is a big line and in most cases not a good idea but Stockport have been absolutely mental in recent weeks. Not to mention that the previous head-to-head between them and Dover ended with 7 goals in October. We definitely expect a minimum of three goals from the hosts but we also expect at least one from Dover. Stockport should be motivated to win this easy fixture and seal their top position but there is always the chance that they will let their guard down against a weak opponent and the visitors might score.

Stockport are a team that plays better in the second half of their games. Most of their goals are scored after the break and we are certain that we will see at least two from them alone. They scored at least twice in most of their recent fixtures. At the same time, Dover's 5 recent away games ended with more than 3 or 4 goals, so there is almost no chance that we will see few goals in this game. You can also try the half-time/full-time option for Stockport but the odds are not as good at this point.

Stockport are the highest-scoring team in the league and the difference from all other sides is quite huge. Especially in recent games, they scored more than 2 goals in 4 out of 5 cases and most of those games were against better opponents than Dover. As mentioned already, Stockport scored 5 goals against Dover in October and that was in an away game – we imagine they will not face any difficulties when playing at home against the weakest away team.

Top Betting Odds and Stats for Stockport vs Dover

FAQs regarding Stockport vs Dover 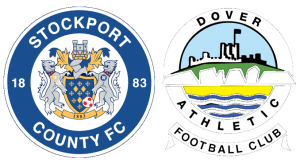 There is no point to compare these two teams as one is the leader in the standings while the other is at the very bottom. Yet, we should say that Stockport have scored almost three times more goals than Dover – 52 next to 20.

• How many goals did Dover concede in away games?

Dover's away performances have been more than terrible. See their stats – 39 goals conceded in just 13 fixtures – that is almost three per game on average.

This game has been scheduled for February 5 at 15:00 UTC.