Stockport and Grimsby meet to battle it out for three National League points on Tuesday. Read our expert predictions and find the latest odds for the clash below in our match preview.

Grimsby are aiming to make it two wins from two in the National League when they visit Stockport. Read our top three predictions for this week’s clash below.

Stockport bounced back from their opening day defeat to Dagenham and Redbridge with an excellent performance and 1-0 victory at Southend on Saturday, and the Hatters look ready to push for maximum points again on Tuesday. County have lost only two of their last 16 National League assignments at Edgeley Park and their strength at home should get them over the line against Grimsby.

We don’t expect supporters to be treated to a deluge of goals when Stockport host Grimsby in Greater Manchester however. The Hatters have scored just two goals in as many games since the new campaign kicked-off, while just a single effort was notched in Grimsby’s opener against Weymouth. With those modest final third figures considered, we’re tipping under 2.5 goals to be scored on Tuesday.

John Rooney quickly became a fan favourite among Stockport supporters last season thanks to his goal-scoring exploits and the reliable finisher rattled the net 16 times in the National League during his maiden campaign for the Hatters. Rooney has already scored in each of Stockport’s first two games in the division this term and the red-hot frontman looks a solid bet in the anytime goalscorer stakes to make his mark on Tuesday again.

Stockport were beaten in the National League Playoff semi-finals last season, though they started their latest promotion charge with a new man in hotseat this term in the form of former Brighton U23 coach Simon Rusk. Rusk will hope to bring his Premier League level experience to County, though it could take some time before we start to see the fruits of his labour.

Grimsby exited League Two and the EFL over the summer, though several pundits have tipped to them to rebound between the tiers at the first time of asking in 2021/22. Manager Paul Hurst – who was relegated with the Mariners just a few months ago – has been entrusted with leading the club back up, though a downturn in results could see the pressure start to crank up on the 46-year-old.

Top Betting Odds and Stats for Stockport vs Grimsby 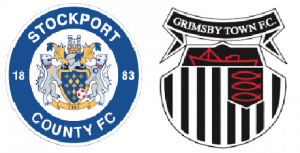 Tuesday’s game will be played at Edgeley Park.

Stockport and Grimsby haven’t met each other since 2013. The Mariners beat County 2-1 when the teams last faced off.