Stockport To Win 2nd Half

Stockport will face Torquay in a match that was postponed months ago in the National League.

Stockport need one more win to secure their participation in the playoff semi-finals and moreover, they can still get that direct promotion with a bit of luck.

There should be no doubt about the expectations about this game – a lot of goals. These are two of the teams with the most goal-packed games this season and while the game has no meaning for the visitors, Stockport will give us their best. Moreover, four of the last five games between these two teams also ended with more than 2.5 goals. This is a common result between these two sides.

Stockport have the second-best attack in the entire league with 84 goals in 42 games to date. At home, they scored 41 goals in 20 fixtures. On the other side, Torquay have one of the worst defenses in away games and conceded 29 goals in 20 games. Stockport won 13 out of their last 15 home games in all tournaments, so we expect a solid performance from them again.

We expect Stockport to be the much stronger team throughout the entire game but we are mostly expecting goals in the 2nd half. Stockport are a team that scores most of their goals in the later stages of their matches. In most cases, they score more than one goal at home and we think that even if Torquay show some resistance at the start, the 2nd half will go in favor of the hosts.

Stockport have been fighting for that National League championship since the start of the campaign and they have an absolutely incredible opportunity to win the league now. The team has equal points to the leaders but one additional game to play and both will be at home. Their recent form has not been incredible at all but this mostly refers to their away performances. At home, they have been extraordinary this season.

Torquay had their chances to end in the promotion zone but with a single win in their last five games, those chances no longer exist and they will have to play another season in the National League. The team has a solid attack but their defense can be improved, especially when they play away from home. The team has nothing to play for at this point but this match is a National League derby and we expect a lot of action.

Top Betting Odds and Stats for Stockport vs Torquay

FAQs regarding Stockport vs Torquay 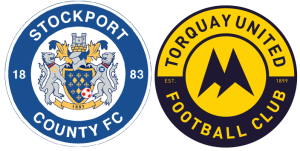 In which places are Stockport and Torquay?

Both teams are among the better sides here but will end in completely different parts of the table. Torquay are now 10th in the league with 65 points while Stockport are currently 2nd with 88 points and an additional match to play.

This fixture has been scheduled for Stockport's home ground – Edgeley Park.