Sunderland and Bradford City will be playing against each other this midweek for their EFL Trophy engagement. Sunderland would be keen to terminate their losing streak while Bradford will struggle for the first win of the EFL Trophy.

Sunderland has lost three games consecutively before this game but were doing great before this awful streak. Despite the disappointing results recently, The Black Cats have collectively five wins in the last nine games and have won both of their EFL Trophy group stage fixtures. On the other hand, Bradford city recorded only one victory in the last six matches and are yet to win in the EFL Trophy. Adding more to this, Sunderland has got three consecutive wins playing against the Bantams and will be in high spirits over home advantage as well to take the lead in this match.

Two of the last three H2Hs between the teams have witnessed a BTTS outcome. The Bantams are scoring with consistency in the recent matches and are expected to cross the goal line again in this match. Sunderland has scored only in two games out of the last five but given their stats against Brandford and in the current season of EFL Trophy, we believe the home side will get their scoring momentum back. We will predict the match to give a BTTS outcome at the end

The Rokerites lost their last game against Mansfield by giving the lead of one in just the fifth minute of the game and got the setback as 0-1, playing in the FA cup. The Lads also dropped to the fifth position in League two by getting three defeats in a row in League One. However, they have got a good start to the EFL Trophy and won both games so far. Jordan Willis and Arbenit Xhemajli won’t be available for club boss Lee Johnson.

The citizens were holding the lead as 1-0 but leaked the goal in the last minutes of the game and drew the result. Bradford also has failed to get a pleasant start to the EFL Trophy and lost both of their opening games. The team has got four draws in the last six matches with one win and one loss.

Top Betting Odds and Stats for Sunderland vs Bradford

FAQs regarding Sunderland vs Bradford Coverage and Accessibility 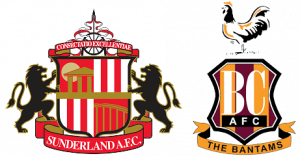 Sunderland won with a 1-0 scoreline.