Sutton are hoping to cement a place in the top seven of League Two when they go up against strugglers Barrow at the VBS Community Stadium. This meeting has the potential to inflict more pressure on Barrow, who are just two places above the bottom two.

Sutton were able to enjoy a comfortable 2-0 win over Mansfield Town in the midweek action as Matt Gray’s men were able to take advantage of Mansfield’s inability to finish of chances. Barrow had a very poor outing against Forest Green Rovers after suffering a 2-0 loss.

Sutton have come up with excellent results over the last few weeks. Apart from the loss to Leyton Orient, the recent games have provided Sutton with the kind of momentum that would help them cement a place in the play-offs or even beyond. Barrow are winless and goalless in the last three matches and they have continued with a slide back down the table. Even though Barrow have beaten Sutton in three out of the last four meetings, this game may go in favour of the hosts.

The last game between these two clubs produced a remarkable 2-2 draw. In recent matches, however, Sutton have witnessed an overwhelming number of games with less than 2.5 goals. This is largely down to their defence, which does not get carried away even after registering four blanks in the last five games.

Sutton have been on a roll over the last few weeks, but the team still cannot be certain about a place in the play-offs. The gap to the likes of Leyton Orient and Newport County is still not very large. Sutton have also not been scoring a lot of goals to gain comfortable victories. As many as three of the last five games for Sutton have seen Matt Gray’s men get a victory only by a single goal.

Barrow have not scored in the league since the effort against Rochdale towards the end of October. Such is the kind of form that Barrow are not far from the relegation spots. For the time being, there is a small offer to keep them content.

Top Betting Odds and Stats for Sutton vs Barrow

FAQs on Sutton vs Barrow game 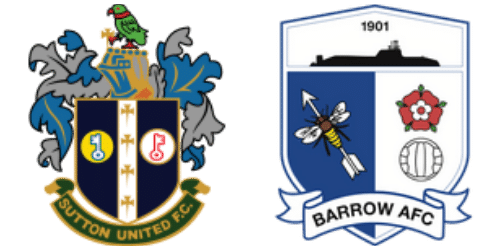 VBS Community Stadium is the place where this match will be held.

The team seen as a favourite by bookmakers to win the match would be Sutton.