Sutton and Bristol Rovers meet at the VBS Community Stadium in League Two on Saturday. Sutton are aiming to prolong their promotion push at Rovers’ expense this weekend. Read our free predictions and find the latest odds for the fixture below in our detailed match preview.

Sutton have won five of their last six home assignments ahead of their tussle with Bristol Rovers on Saturday. Read our top three predictions for this weekend’s fixture below.

Sutton are right in the automatic playoff mix and following a fine seven-match unbeaten surge in League Two, The Yellows are favoured to claim another three points at Bristol Rovers’ expense. The Pirates are in decent form themselves, though they have benefitted greatly from a kind run of fixtures and Sutton – who have won five of their last six games at home – are a more formidable foe.

Bristol Rovers conceded twice in their last away game at bottom club Scunthorpe and against a higher-calibre Sutton side, their defence could suffer again. Matt Gray’s promotion chasers have notched at least two goals in six of their last eight League Two skirmishes and Sutton have the quality up front to plunder over 1.5 goals again this weekend.

With three goals in his last three appearances for Sutton, Isaac Olaofe has hit a rich vein of form and the attacker could be worth backing to make his mark again when Bristol Rovers come to town on Saturday. The 22-year-old, who is on loan from Millwall, is playing with a real spring in his step and Olaofe has the skillset to do some damage this weekend.

Sutton are level on points with third-place Newport in the race for automatic promotion thanks to their professional 2-0 win at Carlisle last weekend and back at the VBS Community Stadium – where they have pocketed 16 points from the last 18 on offer – the Yellows look primed for more success. Sutton could be without injured pair Coby Rowe and Harry Beautyman again on Saturday, however.

Bristol Rovers’ 1-0 win over Walsall was their fourth win in five League Two tests, though the Pirates needed a 90th minute effort from Aaron Collins to beat the struggling Saddlers. Luca Hoole was handed his marching orders in the game for two bookable offences and the midfielder will be suspended this weekend as a result. Mark Hughes and Alex Rodman are also sidelined with injury complaints.

Top Betting Odds and Stats for Sutton vs Bristol Rovers 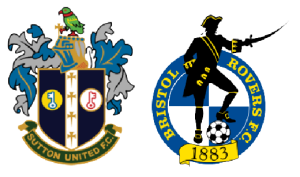 Bristol Rovers beat Sutton 2-1 in an FA Cup second round clash between the clubs on December 4th.

Sutton have been priced as favourites to beat Bristol Rovers by the bookmakers.