We are reaching the business end of proceedings in the EFL Trophy and have now reached the quarter final stage. For clubs in Leagues 1 and 2 this is a huge opportunity to make history and provide a wonderful Wembley day out for their fans. An all League 2 clash awaits us as Sutton host Harrogate in one of the four quarterfinal ties.

If you asked fans of these clubs 5 years ago that both Sutton and Harrogate would be squaring off for an EFL Trophy quarter final it’s unlikely that they would have believed you, but here we are with two clubs who have in recent years been promoted into the football league, having the chance to clinch a semi final spot in the EFL Trophy. Eight places separate Sutton in third to Harrogate in 11th but Sutton’s 1-0 win which came just before Christmas is a sign as to how competitive this game will be. Both teams have been in good form in the league with Sutton unbeaten in their last five and Harrogate winning three of their last five. We will give a slight edge to Sutton due to the fact they are playing at home but wouldn’t be surprised if this went all the way.

Last week’s 0-0 draw against Northampton was Sutton’s first game in five matches where both teams hadn’t scored, before then games involving Sutton were just involving a tonne of goals. Harrogate on the other hand have been a lot more straightforward and have only seen both teams score once in their last five. When these sides meet, both teams have scored in three of the last five matches and we feel this is  the way this game is going to go. Sutton just can’t keep people out but are also one of League 1’s most prolific scorers and to back both teams to find the net seems the smart play.

Both teams to score in the first half

It’s a tough contest to try and find some good value in, but in backing both teams to score in the first half, we might have found a nice betting angle. In three of Sutton’s last five matches both teams have ended up finding the back of the net in the first half which we feel is a fairly remarkable stat. At a decent price of 17/5 this could be worth a small play.

The Best Match Odds for Sutton vs Harrogate 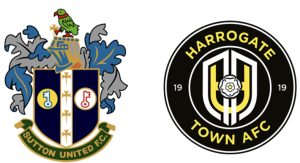 In the last five matches between the pair, Sutton have won three, with Cambridge winning one and there has also been one draw.

What is the kick-off time for Sutton vs Harrogate?