Sutton and Northampton meet for a crucial League Two clash on Saturday. Two of the division’s playoff contenders face off at the VBS Community Stadium. Read our free predictions and find the latest odds for the fixture below in our detailed match preview.

Sutton put their six-match unbeaten surge on the line when they host Northampton on Saturday. Read our top three predictions for this weekend’s fixture below.

Sutton’s stirring last-gasp win over Colchester in midweek allowed them to leapfrog Northampton into third spot in League Two and the teams’ positional swap highlights the difference between their current form. Sutton have won three of their last four assignments, while the Cobblers are winless in three attempts, and with the momentum firmly with the hosts, we’re tipping them to complete the league double over Town on Saturday.

Sutton have been playing some eye-catching, cavalier football in recent weeks and as a result, four of their last six League Two fixtures have produced goals at both ends. A bet in the same market would have returned a winning in seven of Northampton’s last nine games in the fourth tier and with both sides just as likely to concede as they are to score, we expect drama at either end again.

Our third tip draws from the same reasoning as our second prediction and bettors are advised to consider a stake on over 2.5 goals on Saturday. Sutton’s last six League Two skirmishes averaged a healthy 4.0 goals per 90 minutes, while the net rippled a whopping 13 times in Northampton’s last three away fixtures combined. All the ingredients are there for another entertaining affair on Saturday, so stick to the over 2.5 goals line at the VBS Community Stadium.

Sutton vs Northampton Match Preview: Momentum is with the hosts

The roof nearly came off the VBS Community Stadium on Tuesday evening when an injury-time Will Randall-Hurren strike won three points for Sutton against Colchester – a result that moved The Yellows up to an automatic promotion spot in League Two. The newly-promoted side are enjoying a fairy tale campaign and only two clubs have collected more points at home so far.

Northampton have taken just one point from their last three league matches, though they did manage to hold leaders Forest Green to a 1-1 draw last time out. Town are still in the mix for a top-three finish this term, though they will need to up their output in the final third to kick on. The Cobblers have scored just seven times in their last six League Two fixtures.

Top Betting Odds and Stats for Sutton vs Northampton 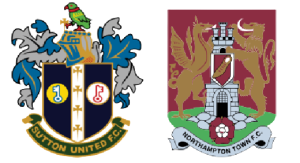 Sutton are the bookies’ favourites to pocket three points at Northampton’s expense this weekend.