Two winless clubs meet at the VBS Community Stadium when Sutton host Oldham in League Two. Read our predictions and find the best odds for Saturday’s game below in our expert match preview.

Sutton play their first home game of the new season when Oldham visit the VBS Community Stadium on Saturday. Read our top three predictions for this weekend’s clash below.

Oldham are the only club in League Two to hold a 100% losing record after four matches of the new season and things could get even worse for the Latics this weekend. Sutton built up some confidence following successive draws on the road at Salford and Scunthorpe, and playing at the VBS Community Stadium for the first time this term, we’re tipping them to harness the energy from the home crowd against Athletic.

It’s worth noting however, that Sutton have plundered just two goals in three League Two assignments this season, so any margin of victory of the hosts this weekend will probably be slim. Oldham have also hit a paltry two goals in their four league tests since the summer, and we’re tipping under 2.5 goals to be scored with that in mind.

Oldham have contested six competitive fixtures so far this season and remarkably, they have conceded the first goal on five separate occasions. That stat will be music to Sutton’s ears, so expect the hosts to come out of the traps quickly on Saturday in an attempt to target Athletic’s weakness. With that considered, backing Sutton to notch the first goal on Saturday could be a smart move.

Sutton are feeling their way into life in League Two and after they picked up the first EFL point in the club’s history at Salford, they followed it up with another against Scunthorpe last time out. On Saturday, Sutton will take another step towards immortality when they play their first ever EFL fixture on home soil and the atmosphere at the VBS Community Stadium should be incredible.

If you had asked any Oldham supporter about their team’s prospects for the new campaign, the response would have been a shrug of the shoulders, some muttering about a season of struggle and an expression that read “it is what it is”. Unfortunately for the Latics and their army of forlorn followers, the early exchanges of the season have produced little in the way of positivity and Oldham’s haul of four defeats from four fixtures is an ominous and perhaps foreshadowing set of results for one of the division’s prime relegation candidates.

Top Betting Odds and Stats for Sutton vs Oldham 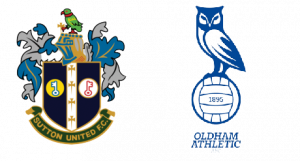 Saturday’s game will be played at The VBS Community Stadium.

This weekend’s game will be the first ever competitive meeting between Sutton and Oldham.