This seasons EFL Trophy has entered the knockout phase of the competition and we have reached the last 16 phase with a clash between two teams based in the capital as Sutton take on Stevenage.

Sutton have to be considered the favourites for the clash. Both of these teams are in the same division but it’s Sutton, the League 2 new boys who are having the better season, currently sitting pretty all the way in 6th spot. Stevenage as they seem to do most years are in a battle at the bottom half of the table and find themselves in 18th position in the table.

Both of these sides come into the game in good form, with both sides only having lost one of their last five contests, however home advantage could be crucial as could the recent head to head which Sutton edged narrowly. Sutton get our vote to advance to the next round.

This is a match that both teams will be eyeing up a victory and it presents both teams with an ideal chance of progressing to the next round of the competition. Because of this, there is every chance that this could turn into a cagey affair. At home Sutton have only seen over 2.5 goals exceeded once in their last five whilst Stevenage away from home have seen it surpassed in their last five straight. Something has to give and we will err on the side of caution and hope for a low scoring contest.

When these sides met earlier on in the season the score finished as 2-1 to Sutton so both teams have scored previously. In Sutton’s last five matches both teams have scored in just one of these games, whereas for Stevenage it has occurred in three of the last five. It’s a cup game so although it could be cagey we will bank on both teams finding the back of the net here.

The Best Match Odds for Sutton vs Stevenage 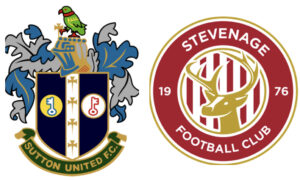 These sides have only met once before with Sutton winning 2-1 earlier in the league. This game was also played at Gander Green Lane.

What is the kick-off time for Sutton vs Stevenage?